Fortress Douaumont is a classic monument of engineering from the First World War in France, on the Western Front. The fate and history of the fortification during the battle for Verdun is very interesting. Abandonment by the French army, use by the Germans, battle for Douaumont.

Fort Douaumont Museum – the famous WW1 battlefields fortress near Verdun.
Fort Douaumont was built as part of a fortified defense area of ​​France, starting from the 1890s, consisting of a system of 19 fortifications surrounding the city of Verdun. During the First World War, the fort fell into the very epicenter of the battle for Verdun, which lasted 300 days and is known throughout the world as the largest battle. Read more about the history of Fort Douaumont. 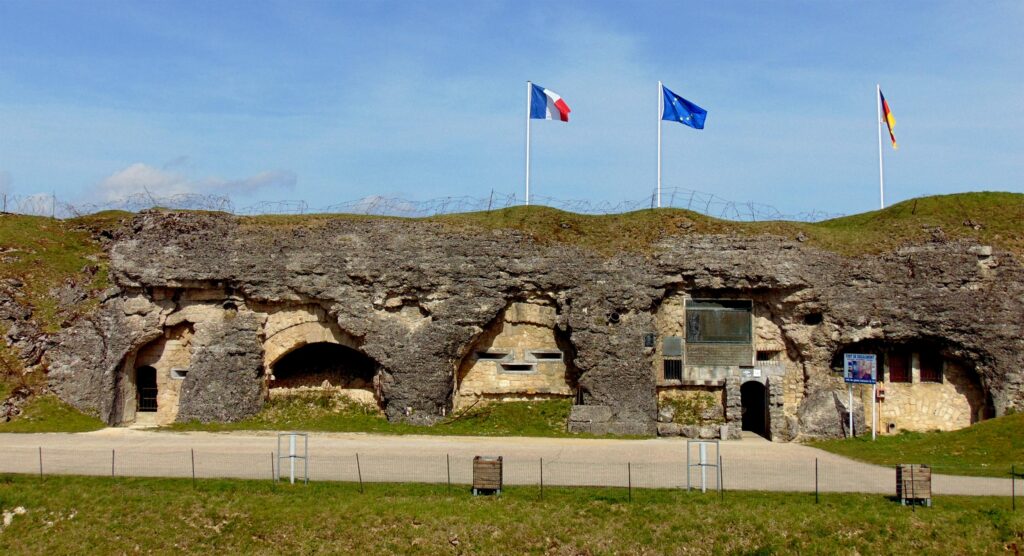 There is a museum inside the fortress. Guns and light small arms of the armies of the countries participating in the First World War. Entire fragments of the internal infrastructure of the fortress with sleeping quarters, dining rooms, service rooms have been restored.

Interesting Facts.
When there was a battle for Verdun, one of the French aviation pilots was a Russian Ace, nicknamed “Cossack”.
During an excursion from Paris to the battlefields near Verdun, be sure to visit this fortress. The building was well preserved despite heavy shelling and bombardment. The forts were designed just for this. It also makes sense to go on the road to Champagne, near Reims, before or after Verdun, to see another such building – the Pompelle fortress

Set on real battlefields, the fort ranks among the best World War I museums in France. This world heritage site is included in the program of all excursions to the battlefields of the First World War in the area of ​​​​the city of Verdun.

Fort Douaumont is a well-preserved engineering and fortification structure from the late 19th to early 20th century. Recommended for visits to the 100th anniversary of the First World War for both adults and children. Useful and interesting.