French Alps, the travel guide and the reference book. What to see, the museums, the sightseeing tours, the places of interest, the natural parks and the museums. It is customary to divide the Alps into the following main geographical and tourist areas: Lyon and the Rhone Valley, Grenoble and Isère, Savoy, Haute Savoie, Southern Alps (Côte d’Azur, Nice, Cannes and Provence), Geneva and surroundings (since the path to everything goes through it resorts), although Switzerland.

Alps Ski resorts in France, the descriptions & reviews, how to get there, the transfer.

The French Alps are located in two regions (according to the new classification of 2016). From a tourist point of view, they are divided into the following zones shown on the map: Geneva and Haute-Savoie, Lyon and the Rhone Valley, Savoy, Grenoble and Isère, the Southern Alps to Nice and the Cote d’Azur. 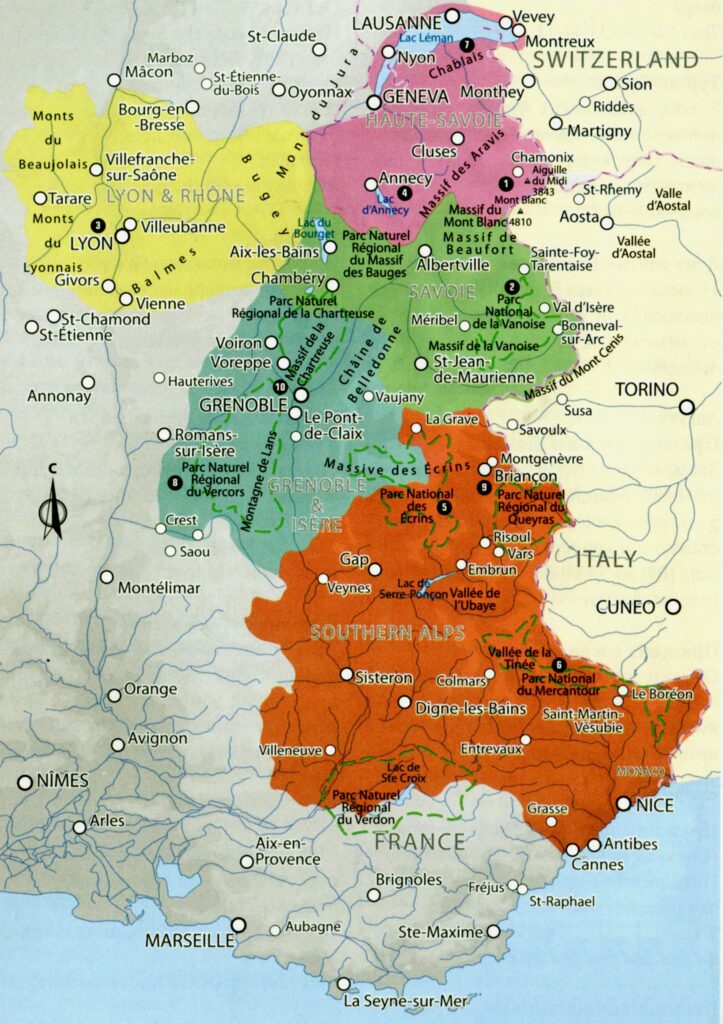 Nature, the charming landscape of the mountainous and foothill areas of the French Alps is determined by many factors, including primarily the height above sea level, the presence of lakes, rivers and valleys. The snow-capped peaks of the mountains look very beautiful in summer. The photo clearly shows both the snowy peaks and the forest on the slopes. In the west and south, the slopes are more gentle, and the mountains themselves are not so high.

The mountains, The Alps are a complex interweaving of mountain ranges, higher in the eastern and central parts, bordering Italy and Switzerland in the north. The mountains to the west and south are more gentle, including plateaus and hills, collectively called the Foothills or “Pre-Alps”.

Valleys, rivers and lakes. The largest valley is the Rhone Valley, which separates the foothills of the Alps and the Beaujolais and Ardèche mountains. In the mountains there are many valleys and gorges, through which small mountain streams pass, such as the Isere, for example. Often they are surrounded by waterfalls, which only decorates the road from the airport to the chosen resort. There are also large flat lakes with their own separate tourist infrastructure, as well as small mountain lakes, which make them a favorite summer vacation spot.

Flora – the forests, the flowers, the plants. The pre-alps and the lower part of the mountain slopes are simply buried in greenery. In the mountains, especially very high ones, it is much smaller and the slopes look deserted and sometimes snowy, even in summer (to the delight of skiers in the heat). The north and south of the Alps also differ greatly in vegetation. Forests in the Alps are predominantly coniferous. Spruces, pines and firs are present even at heights. To the south, closer to the Cote d’Azur, Mediterranean cypresses grow, as well as larch (on dry slopes). There are beech, oak, almond and hazelnut. From spring to late autumn in the Alps there is an abundance of wild flowers, herbs, wild berries. High Alpine plants and herbs are widely used to make liqueurs, medicines and perfumes. The most famous of them are wormwood as an important component of liqueurs, blueberries and dandelions.

Fauna -the birds, mammals. The main part of the animals is, naturally, in natural parks. In ordinary open spaces, you can only see a small snake near the road or in the mountains, as well as various birds of prey in the air. Classical mountain birds are found here – golden eagles, bearded vultures and owls (sparrow and upland owls, owls). There are black grouse, tundra and white partridges. Migratory birds such as ducks, swans, gulls and cormorants nest on Lake Geneva, Annecy and Bourges. Alpine marmots can sometimes be found on the slopes, usually avoiding people, hearing them by their characteristic whistling sound. Often there is a chamois – an agile hoofed animal with stripes on its head and small horns (see the Paris zoo). In summer, the chamois fur has a reddish tint, in winter it is dark and thick. Sometimes there are moufflons (mountain sheep) and mountain goats. These animals have beautiful large curved horns. A large number of cows graze on local farms (of course, without them there will be no cheese). Lakes and mountain rivers are home to a large number of fish, including perch and trout.

Culture – the art, the museums and the festivals.
In large cities, in Lyon and Grenoble, there are many museums, almost unknown to tourists from the USA, Canada and Australia. Collections of classical and modern European art, faience, religious art, including frescoes. There are also local history and even military history museums. Jazz (Grenoble, Vienne and the mountain resorts), folk music and traditional French songs (chansons) enjoy great success among the festivals. At the resorts, musical groups of a modern dance orientation constantly perform.

Geneva. Although not France, it is directly related to the tourist infrastructure, including the Geneva International airport.

Ski resorts located in the Mont Blanc-Savoie area are considered the oldest and best in France with excellent infrastructure. Here is a map of the mountain ranges and the historical names of the areas of this tourism zone.

Ski resort Three Valleys: Info and map about “3 Valleys”
– Courchevel – the most pretentious and expensive, then only in winter (!)
— Meribel
– Les Menuires
– Val Thorens 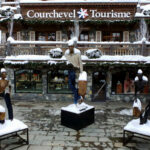 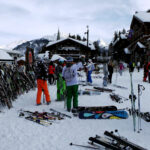 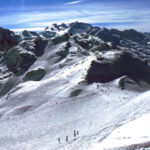 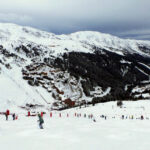 The best ski resorts in France

How to get to Alps ski resorts from Airport, transfer, taxi, rent a car with driver