The main attractions of Paris.
Paris travel Guide. The monuments, the sights, places for walking, museums, excursions, reviews, photos. A short guide to Paris in English, compiled from personal experience and feedback from tourists over the past hundred years by the Union of Taxi Drivers in Paris and Nice. 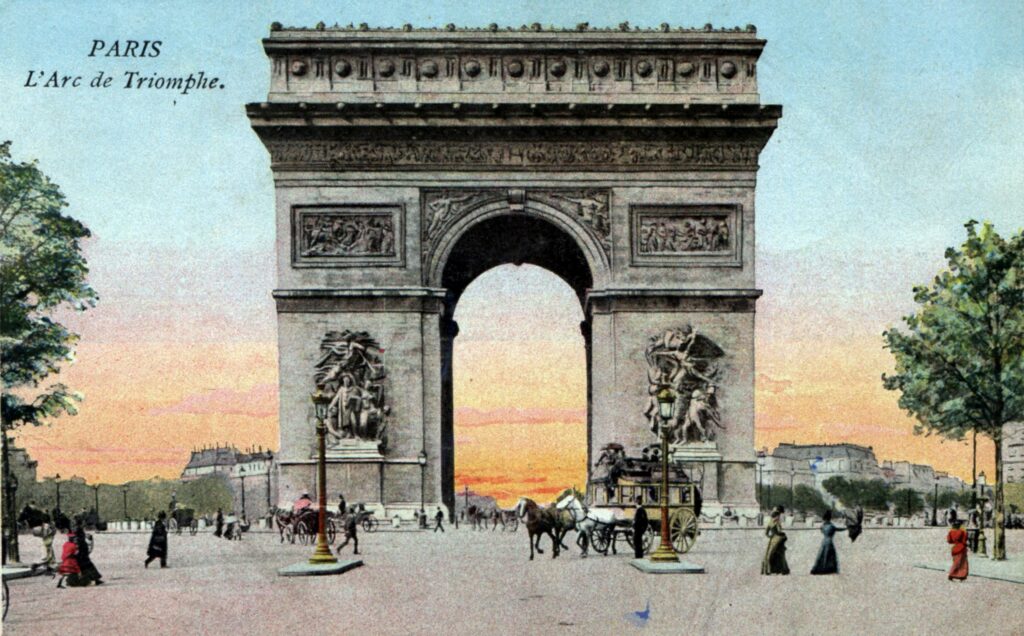 Arc de Triomphe in Paris before World War I

Now the “Travel Guide to Paris” you can be bought at any bookstore in Paris or any other major city in France. All of them have their advantages and disadvantages. Of the latter, the main ones are the limited scope and the irrelevance of many objects. The electronic guide is just good because the amount of textual and visual information is almost unlimited. Our own Travel guide “Paris and all of France” contains not only useful information about the main sights of the capital, the author’s description of the sights, but also old photographs that the authors bought for many years at flea markets. Already an artifact is an old guide book dating back to 1930, which was used by our senior comrades, officers of the Imperial Army and taxi drivers, refugees from the criminal Soviet government after the revolution in Russia. Working in tourism and history for many years, the authors have collected their own photo archive of twenty years ago, filmed with views of Paris in the 90s. Such photographs are already also “historical” and are posted on the site. Unfortunately, some of the authors are no longer alive, but their photographs, including black and white, serve as their eternal memory in the field of tourism. This section is divided into several main parts of the relevant topics and is constantly supplemented. First of all, a description of those objects that have been in constant demand among guests of Paris over the past 100 (!) years is provided. Well, our modern experience for 25 years is also taken into our account.

The best museums in Paris, exhibitions and galleries

– Louvre Museum, world masterpieces of painting and artifacts, sculpture
– Musée d’Orsay, a collection of famous paintings, drawings and sculptures
– Royal Palace (Palais Royal), residence of Cardinal Richelieu
– Conciergerie, royal castle, prison, Palace of Justice and museum
–  Les Invalides – Army Museum and the special expositions
– Triumphal Arch, the eternal flame and the museum
– Fortress-prison Bastille, “stronghold of the world oppression of workers”
– Museum of the Order of the Legion of Honor – a collection of orders from all countries of the world and Russia
– Orangerie, Art Gallery in the Tuileries Garden. Clone of Monet and K
– Georges Pompidou National Center for Art and Culture
– Zoo “Menagerie” (1) at the National Botanical Garden
– Paris Zoological Park Zoo (2) – in the Bois de Vincennes
– Botanical Garden – natural history for scouts and not only
– Disneyland – amusement and amusement park
– Wine Museum – cellars, mannequins, tools, artifacts and tasting
the entire list of museums, exhibitions, galleries of the capital.
See also our guide “The best museums in France”

France, and especially Paris, is a favorite region for the collectors, “collectors of all sorts of things” and of course for the lovers of various, ordinary and unusual hobbies. Even before the revolution, Paris was a favorite place for artists from all over the world, as well as for those who came here to see the world’s masterpieces of ancient and modern masters, as well as learn the craft. Over the past hundred, if not more years, Paris has been and is a trendsetter in world fashion. Ladies of high society, wives of VIPs come here to see the trends and buy something fashionable. Old or “retro” things. There is a special category of lovers of old things, which are something in between antiques and souvenirs traditionally sold at flea markets. Collecting badges, medals, postcards, stamps, scale models. This is a special category of people who have a hobby – collecting various items of a certain theme. If we collect statistics for the last 100 years, we would probably define hobbies, hobbies and entertainment in Paris as follows:
– Flea markets in Paris
– Painting, fine-art, artists of Paris, as well as everything related to this
– Books, literature, maps of Paris, surroundings and all of France
– Fashion, fashionable clothes and accessories, goods for women and children
– The whole list of fascinating and entertaining places in Paris…

Food and the wine stores in Paris, the cheeses
Where to buy cheese, wine or croissants in Paris. In Paris, as in New York, there are several types of grocery stores: medium-sized supermarkets, small shops with or without outdoor counters. If there is good food at the hotel and dinner at any restaurant, all tourists and businessmen, without exception, constantly have a desire to visit a grocery store, which, as a rule, is also a wine and vodka store. Statistics show that most often they go to choose and taste French cheese, and, of course, with French mold. They also buy French wine in different quantities for “tasting”. Juice, water, vegetables, fruits, pastries follow with a significant margin in the list of products. It’s not allowed to eat in hotel rooms, keep food too (well, ants start up there and so on), but an exception is made for French cheese. It is believed that keeping cheese in the room is not “bad behavior”, but quite natural. Unlike the capital of the most “free country in the world”, in Paris there are no time limits for the sale of alcoholic beverages. The limitation is only in hours of work, as the French do not like to work in the evening, and even more so at night. Evening and night trading on every corner in Paris, mostly Arabs. Among the tourists there is even such an evening password: “Well, let’s go to the Arabs?”, Which means an invitation for a drink after buying an additional couple of bottles of wine in the nearest store for “tasting”.
Shop opening hours: usually open daily from 10.00 am to 19.00, closed on Sunday. Sometimes once a week they can work until 21.00 pm.
Supermarkets (hypermarkets) are open until 21.00 or 22.00. Closed on holidays.

Souvenirs from Paris, the original gifts
Metro maps, plans of Paris, maps of France. Most tourists who come to France, instead of a map of Paris, use a small metro map or at best a map of the center of Paris, which can be taken from the hotel. The size of the city is such that only major historical sites are marked. You can buy a detailed map of Paris or France only in specialized stores. One such (multi-storey) is a five-minute walk from the Opera. Further…
Books, literature, “non-periodicals” The age of the Internet and e-books, it would seem, will soon completely destroy paper publications in the form of books and magazines. After all, almost everything can be found on the Internet. Unfortunately, this is far from the case. This is due not only to the fact that the fight against “piracy” has intensified recently, but also due to the fact that many, especially illustrated publications, are simply not made available to the public. Statistics show that those publications that buy books in hard, paper form contain a large amount of illustrative material. Photos, paintings, art, guides to your favorite museums and galleries. Personal experience shows that most of these books and magazines are bought directly from the stalls of the museums you visit. Further.