The French Riviera, the Cote d’Azur are a special cultural, historical and resort area, inextricably linked with Russia and emigration. The place of residence and rest of the Royal Family, the naval base of Russia. Tsesarevich Alexei, Commander-in-Chief of the Russian Army in the First World War, Grand Duke Nikolai Nikolaevich. General Yudenich, Life Cossacks, Life Ataman. Artists, poets, jewelers. Russians who lost their homeland, which was captured by the Bolsheviks and the Soviet Gestapo (NKVD-KGB). This is all “Russian Riviera”.
On the map of France, this part of the country, according to a new division, together with the historical region of Provence, make up the Provence-Alpes-Côte d’Azur region. For beach lovers, we have also included the island of Corsica in this section, which can be easily reached from Nice or Marseille by plane and ferry.

Compiled by the “Union of taxi drivers in Paris and Nice” from experience and over the past 100 years 🙂 using our own archive of the old photographs.

The Cote d’Azur (French Côte d’Azur) is the southeastern Mediterranean coast of France, stretching from the city of Toulon to the border with Italy. The Principality of Monaco is also located on the Cote d’Azur. Another name is the French Riviera (as part of the Riviera, located in both France and Italy) 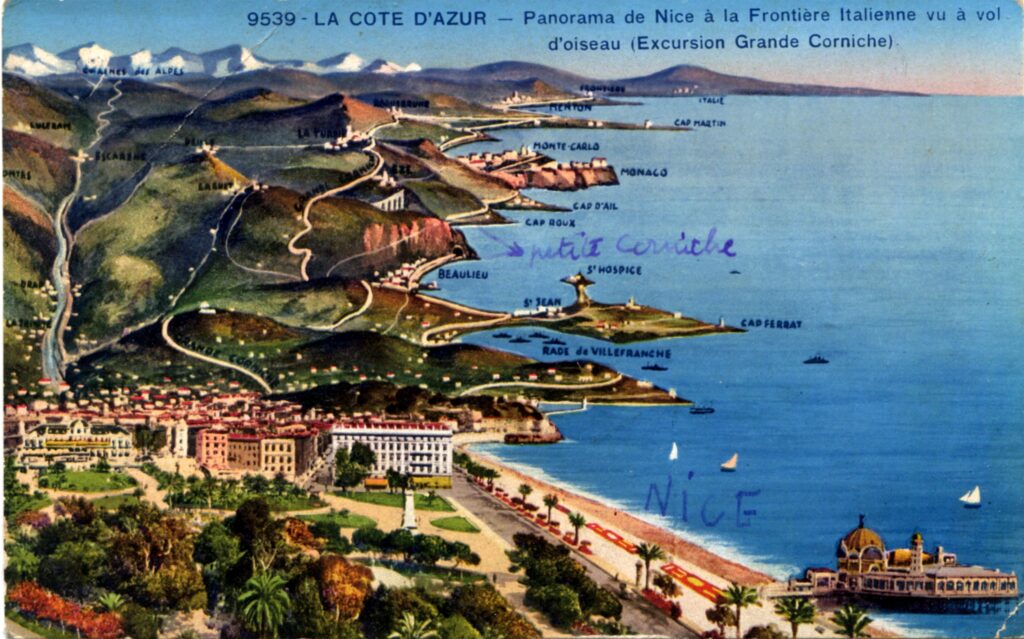 The name was invented by the now little-known French writer and poet Stéphane Liéjard (French) – in 1870 he published a novel with the title “Côte d’Azur”; these words came to his mind when he saw the “amazing beauty” of the bay of the city of Hyères. The popularity of the coast is due to the pleasant climate – mild warm winters and cool summers. The resorts on this coast are considered to be some of the world’s best holiday destinations, which makes hotels and real estate very expensive.

Geography. The French Riviera is called the southeastern coast of the Mediterranean Sea in France, located east of the city of Marseille to the border with Italy (western part of the Riviera) at the foot of the Alpes-Maritimes. The question of the western tip of the Riviera is debatable: in addition to Marseille, Cassis, Toulon or Hyeres are called the westernmost resort. According to the new division into regions, since 2016, the Côte d’Azur, together with Provence, is part of the Provence-Alpes – Côte d’Azur region. Therefore, in this section we will give information about Provence.
The Principality of Monaco is also located on the Cote d’Azur, which until the end of the 19th century included Roquebrune and Menton. East of Menton begins the Italian Riviera, which stretches along the Ligurian coast all the way to La Spezia. To the south of the Côte d’Azur are the islands – Frioul, Hyeres and Lerins. The length of the Cote d’Azur is about 300 kilometers, along the coast, indented by bays, there are mountains with a height (from the north and east – the Alps, from the west – Sainte-Baume (French Chine de la Sainte-Baume), the central part – the Maures and Esterel massifs) up to 3143 m above sea level, which creates a favorable climate: hot summers (average temperature in July + 24-26 ° C), mild sunny winters (average January temperature is about + 10 ° C).
Weather. In total, there are usually about 300 sunny days a year. In summer, the air temperature sometimes rises to +35 ° C, but due to the low humidity, stuffiness is not felt. However, sometimes (most often in early summer) a strong cold north wind from the mountains reaches the coast, blowing along the valley of the Rhone River – the mistral. The wind blowing from the west towards the sea is called the tramontana. In the Marseille area, for example, there are up to 90 windy days a year. To the east the winds are much weaker. Precipitation is rare, mainly in March-April and October-November in the form of rain. The swimming season starts at the end of May and lasts until the end of September. The water temperature at this time ranges from +20 to +25 °C.

Nature. The Cote d’Azur is characterized by palm trees, cypresses, chestnuts. There are many well-maintained parks in the cities, gardens, vineyards, and the cultivation of essential oil crops are widespread. 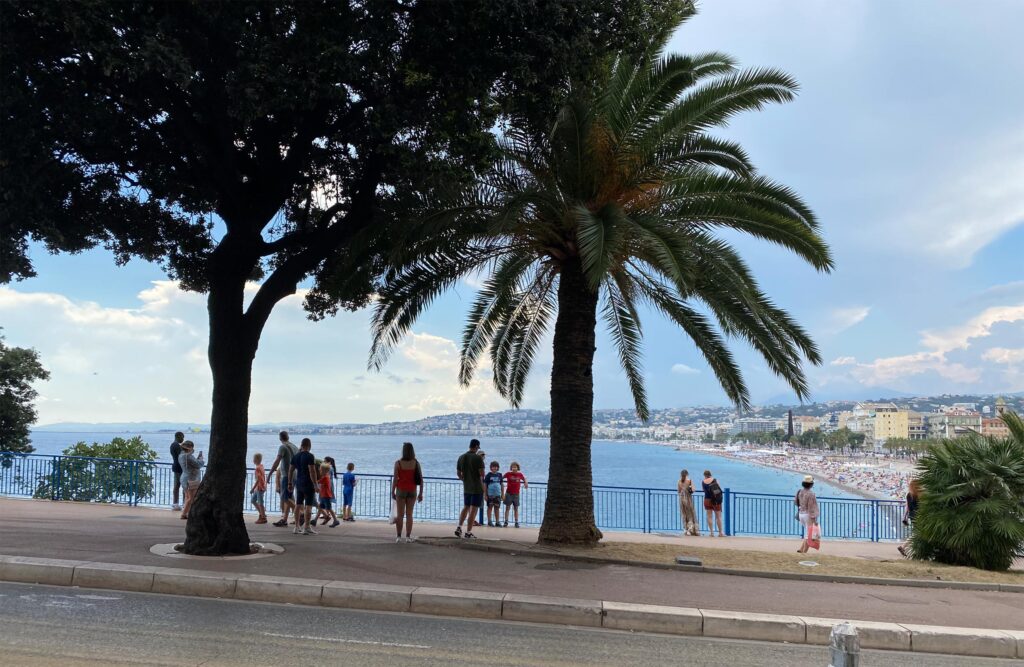 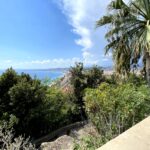 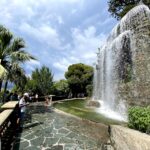 Waterfall at the top of the hill, summer

Côte d’Azur, cosmetics and perfumes
On the Cote d’Azur and in Provence, there are many world-famous manufacturers of perfumes and cosmetics. Many of which are well known throughout the world. For example, “Le Petit Marseiliais” (a little resident of Marseille), which produces shower gels “Mandarin and Lime”, “Orange Tree and Argan”. Soap. shampoo gels, hair care products. Sold in sets with colorful packaging in Russian. “Smile with the nature of Provence!”, “We selected ingredients rich in useful vitamins and combined them in the recipes of our body and hair care products.” The city of Grasse is considered the Capital of Perfumery of the World, where both perfume factories and perfume museums are located.

Castles of the Cote d’Azur

It is believed that most of the castles in France are located in the Loire Valley (see map and list). However, the Côte d’Azur also has ancient, beautiful and interesting castles to visit.
Grimaldi Castle. The nearest and most accessible is located in the city of Cagnes. This stone fortress was founded in 1309 by the ancestor of the princes of Monaco, Rainier I Grimaldi. There is a “small but politically significant palace”.
Inland from the coast are the castles of Sisteron and Ansui.
If Castle (Château d’If). Thanks to Alexandre Dumas and the “Count of Monte Cristo”, this castle-prison is the most famous in the world. This impregnable island near Marseille is home to a fortress and a former French state prison. The most interesting thing is that the castle owes its glory to the fictional prisoner Edmond Dantes, the Count of Monte Cristo. Read more…
Well, if you drive from Nice even further beyond Marseille towards Nimes – Avignon-Montpellier, then there are the castles of Tarascon, the fortress of Aigues-Mortes and Carcassonne. You can still get here during a one-day excursion from Cannes or Nice, but then it’s better with an overnight stay, that is, for two days. Closer to the border with Spain, there are the beautiful castles of Peyreperthuse, Queribus, Sals, Perpignan and Collioure. Call the “Union of Taxi Drivers” and order individual excursions.
Famous cities are located in the region – St. Tropez, Antibes, Nice, Cannes, Monte Carlo. Less known, but very interesting are the cities and villages located in the mountains – Breuil-sur-Roya, Gourdon, Saint-Paul-de-Vence, Tende, Saorge, Sospel. The most multicultural city is Marseille. It is home to 80 thousand Jews, 80 thousand Armenians, 100 thousand Muslims, mostly of North African origin. The Cote d’Azur is visited by more than eight million people a year.
The main religion of the region is Catholicism, but along the entire coast you can see Protestant, Orthodox churches, mosques, synagogues.
Festivals and holidays. Carnival in Nice (February), Cannes Film Festival (May), Formula 1 Grand Prix (June), two pyrotechnics festivals in Monte Carlo (July, August) and others. regatta. Exhibition-parade of expensive yachts and boats. Sports and recreation. Beautiful and interesting.

Boats and yachts. The Riviera is a paradise for sailing enthusiasts, professional athletes and amateurs. Ordinary tourists without special training can rent a boat or yacht with a captain. The skipper will professionally guide the ship along the route you have chosen or suggest interesting places along the coast. There are also boat and boat rentals that do not require a driving license.

Cities and villages of the French Riviera, beaches, resorts:

Practical information. How to get there, the hotels, private tours:
Throughout the Côte d’Azur there are large international and small local airports. For tourists, the main leader in passenger traffic is the airport of Nice. You can also fly here from Paris (Charles de Gaulle, Orly or Beauvais). Residents of Paris love to come here also on the high-speed train TGV-SNCF

– Nice airport. How to get there, taxi, transfer from Nice airport to the hotel / from the hotel and around the cities of the Cote d’Azur. Rent a car with an English speaking driver.
Hotels and villas. There is a wide choice from expensive 5 star hotels to budget 2-3 *. Usually, they first choose a city or a beach resort, and then choose the most suitable option in it.