Reims (sometimes spelled Rheims in English) is a city and commune in northeastern France, located in the Marne department in the Champagne-Ardenne region, about an hour and a half from Paris by car. With 184,984 inhabitants as of 2009, Reims is the twelfth largest city in France and the most populous city in the entire Champagne-Ardenne region, while not being either a departmental prefecture or a regional capital (the capital of the region is the city of Châlons-en-Champagne).
The formation of the city of Reims and its fortifications in antiquity.
The place that was to become the city of Reims was not particularly favorable for defense. Located at the bottom of a basin adjacent to the small river Vesle, the urban settlement was surrounded by the hills of La Housse (la Housse, to the southeast) and Sainte-Genevieve (Sainte-Geneviève, to the northwest), which dominated nearby. Such a location in the era of Antiquity required the construction of artificial fortifications. In the 1st century BC, the Gallic tribe Remesifia unoppidum called this village Durocorter (meaning “round fortress” in the Celtic language); it consisted of a large ditch fortified with an earthen dam with a strong frame of rectangular tree trunks topped with a palisade and wooden towers. This oval fence provided protection over an area of ​​about 90 hectares. During the Gallic War, Remes allied himself with the Romans; winter 53-52 years. BC, at the height of the uprising of other Gallic tribes, Julius Caesar, apparently for the safety caused by the actions of the enemy, wintered there with his ten legions. In the Roman era, Reims, under the Latin name Durocortorum, became the capital of the Imperial Province of Belgium. Under the Upper Empire, with the help of Pax Roman, the city was deprived of defense. On the other hand, in the Lower Empire, during the barbarian raids and looting that frequently appeared in Gaul from the second half of the 3rd century, imposing fortifications were erected in the period around 330-350 BC. AD; the oval enclosure, surrounded by a large glacier and a moat, was a wall about ten meters high, punctuated by regularly spaced semicircular towers. Four ancient arches representing the protrusions of the cardo and decumania, one of which, the arch of Port Mars, which has survived to this day, was turned into a fortified gate. Occupying an area of ​​55 hectares, the city in the era of the Lower Empire was part of the ancient Celtic oppidum.
Emperor Valentinian 1st settled in Reims in October 365, and it was from this newly fortified city that his Master of Cavalry, Jovin, completely defeated the Alamans in three battles that ravaged the province.
During the Middle Ages, the need to rethink the city’s defenses was imposed in the 13th century; in fact, the enclosing structures of the period of the Lower Empire, despite numerous repairs, were very dilapidated. On the other hand, a population boom forced part of the population to settle outside the walls, and, in addition, a real village formed around the rich abbey of Saint-Remy over many centuries. Faced with the danger of raids by Viking and Magyar (Hungarian) robbers, all this was first fortified with a wooden palisade, then between 923 and 925. Archbishop Seulphe built a real stone wall (of which some remains are still preserved), as well as a castle (small fort), the memory of which is kept in the name of the modern Châtelet street. 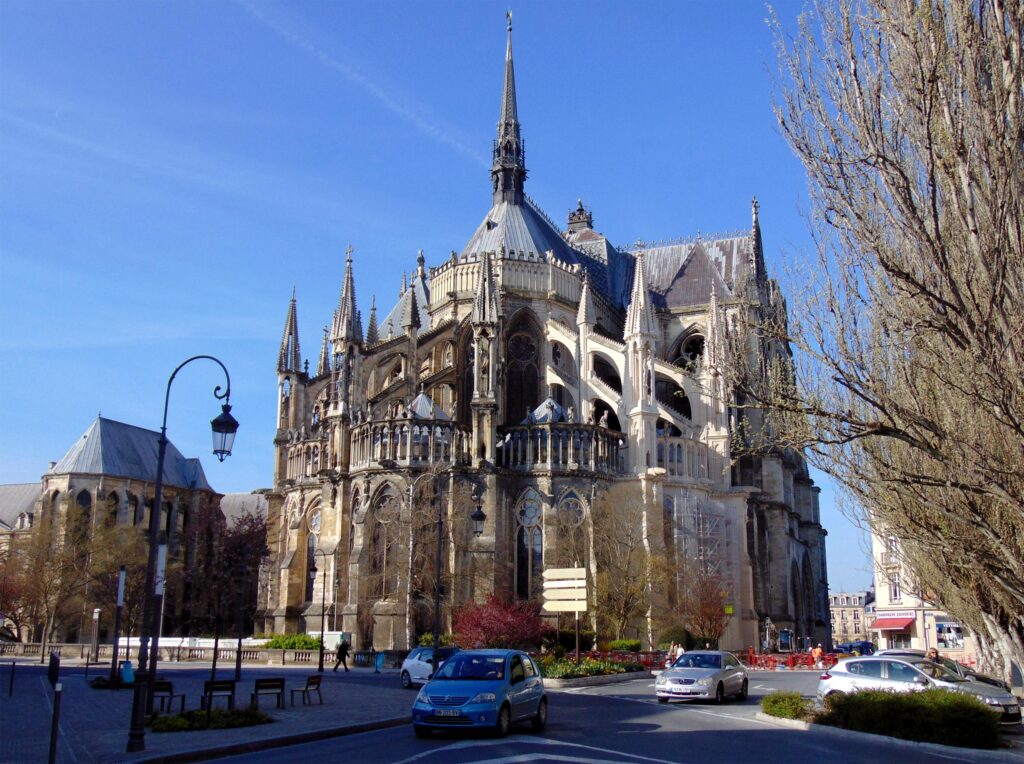 Reims Cathedral (private Champagne tours from Paris by a car)

Under the rule of Philippe Auguste, the ancient buildings, the village of Saint-Remy and the space between these two centers, including orchards, vegetable gardens, craft workshops and habitats corresponding to all the small parishes and monasteries outside the stone wall were included in a single and huge fortification. The fortress, endowed with about thirty towers and fortified gates, had a perimeter of 6500 meters, fortified in the north-north-west by the castle of the archbishops of the Dukes of Reims, and in the west by a river bend (see the old map – Reims – Champagne diagram). A year after the completion of the fortress in 1358, this new fortification played a decisive role in the fate of the country: King Edward III Plantagenet of England (Édouard III Plantagenet) claimed the throne of France. Taking advantage of the imprisonment in London of King John II (Jean II), he forced his army to cross the strait during the winter of 1359-1360 with the task of capturing Reims by force to become the crowned King of France there! Defended by their new fortifications, the resistance of the stubborn militias of Reims under the command of the royal captain Gaucher de Chatillon (Gaucher de Châtillon) thwarted an attempted coup by the King of England, who was forced to ingloriously retreat and abandon his plans.

History of the city of Reims in the 19th century. The last military adventure experienced by the city walls took place during the French campaign of 1814. During the 19th century, the old fortifications of Reims were gradually dismantled as they no longer met the requirements of modern warfare. In 1848, the national workshops stopped most of the work that had already been done by digging the canal, and in 1871 the municipality finally dismantled what was left of it to give work to the inhabitants of Reims, who found themselves idle due to the Prussian economic blockade. Today, the only remnants that still survive are:
– part of the dam, called “Butte Saint-Nicaise” (“Butte Saint-Nicaise)”, overcome by a secondary structure
– the fortress tower of Pua (Tour du Puits), crossed by a rear gallery with a small guard room of the 13th century.
Thus, at the beginning of the second third of the 19th century, the War Office had to start a fundamental reflection in order to rethink the ways of defending Reims.

The city of Reims (Champagne) on the eve of the First World War.
After the defeat in the Franco-Prussian War and the adoption of a new strategy for the defense of France, Reims and its environs turned into a large fortified area of ​​the second line between Paris and the border. It should be noted that the city of Reims itself was a place of deployment of units and a place for training, but in no case was considered a fortress and a place of military operations. In this regard, the Reims garrison did not stop arranging the location of the units for a decade after the completion of the construction of defensive structures around the city. New barracks appeared in the suburbs, which made it possible to significantly increase the number of troops. According to the state of the garrison in 1895, we can judge by the following military units located here:
– Headquarters of the 12th Infantry Division
– Headquarters of the 5th Cavalry Division
– Headquarters of the 3rd Dragoon Brigade
– 132nd Infantry Regiment
– 46th Infantry Territorial Regiment
– 1st Dragoon Regiment
– 16th Dragoon Regiment
– 3rd Infantry Battalion
– depot of the 161st Infantry Regiment
– depot of the 5th cuirassier regiment
– depot of the 3rd hussar p.
– depot of the 8th hussar p.
As a result, the fortified belt of Reims, the study and construction of which lasted from 1874 to 1885, consisted of seven forts, three batteries, a shelter, an observation deck and two storehouses under a stone (cave shelters) using 245 pieces of artillery and a garrison of 3769 people. The cost of all structures can be estimated at 14 million gold francs.
The first orders for the development of fortifications were given on November 30, 1874, and the acceptance of the first completed project (Cran de Brimont battery) dates from May 21, 1875. In the autumn of the same year, construction work began on forts Brimont and Witry. Forts Fresnes and Pompelle were the last to be built in 1883. This was followed by some more work in 1892 on the construction of cave shelters at Berru and Nogent-l’Abbesse.
The artillery of the fortifications included the 3rd Fortress Artillery Battalion, which with its fire controlled the canal, bridges on the Vesle, railways and roads leading to Soissons, Laon, Mezieres, Chalons and Epernay, and also blocked the road to Paris. 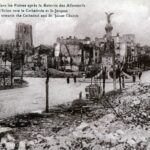 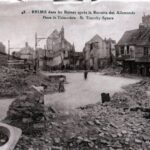 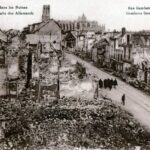 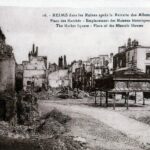 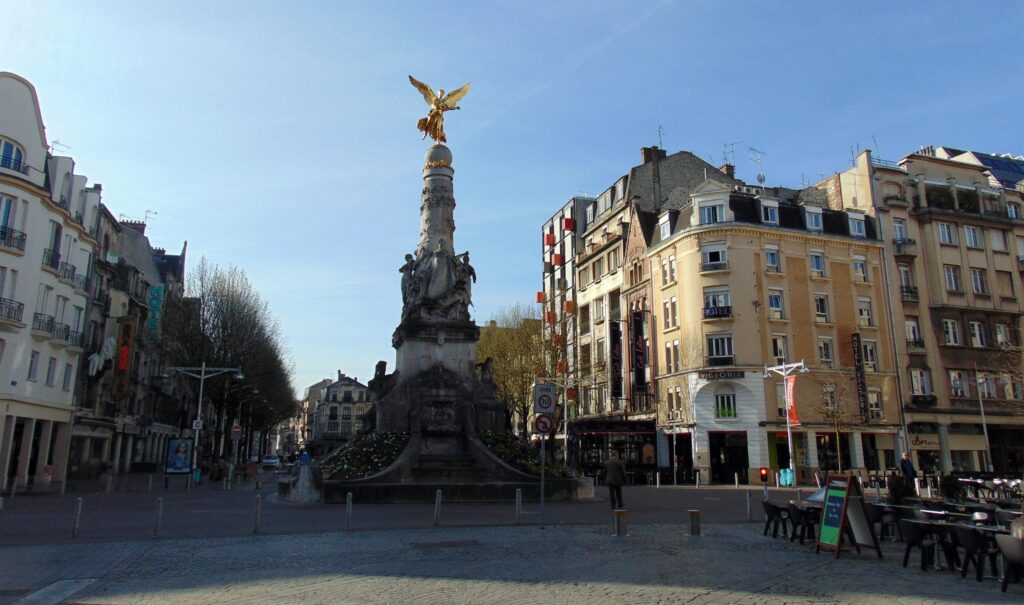 Reims: Transport, taxi
The city of Reims uses the tram as the main mode of transport. Handsome, modern. Taxis are available in the city, but the problem is that there are taxi ranks near the railway station and sometimes near the Cathedral. This is not Paris, you can’t catch a taxi on the street here. Local residents or tourists from the hotel order a taxi by phone.

What else is interesting to see during an excursion to Reims.

Museum of the Fine Arts.
Founded in 1794 for the exposition of valuables confiscated during the revolution. Moved to the buildings of the former abbey of Saint-Denis in 1908, the museum presents collections reflecting all the major art movements that existed from the 15th to the 20th century.
Car Museum, Reims, a unique collection of retro cars of all time, one of the best museums in the world. A magnificent collection of various vintage cars from the beginning of the 20th century, the First World War, cars of “Russian taxi drivers in Paris in the 20-30s”, old timers of the 40s, 50s, 60s.

The Shopping, the stores.
Galleries Lafayette – famous shopping arcades, but of course smaller than in Paris 🙂
Useful tips and frequently asked questions.
Where to buy batteries for the camera?
The eternal problem is that the batteries run out at the most inopportune moment of the tour. It’s always better to have a small supply. In Reims, as in Paris, there are small “Arab” shops, though not in the center where you can buy AA batteries, but as a rule, “left” firms that do not work as efficiently. Proven and best companies, primarily Duracell, can only be bought in medium and large supermarkets. On an excursion from Paris to Champagne in April 2015, we shopped at the twilight between the Cathedral and the Automobile Museum, address below. The price of three sets for “Sony” was 17.5 Euros and provided work for several museums.
“Market Reims Clemenceau” – a small supermarket where you can buy everything for the camera and its owner, including good local wine or champagne 🙂
Address: Building 5 bis Avenue Georges Clemenceau.
Opening hours: Monday to Saturday from 8.30 am to 20.00 pm, Sunday from 9.00 am to 12.00 pm.
Official website: carrefour.fr

Practical information. How to visit