Travel Guide Book to Paris, the interesting places to visit.

The Wine Museum of Paris (in French, Musée du Vin) is a cultural institution in the 16th arrondissement of Paris, at 5 Charles Dickens Square, next to the Trocadero and the Eiffel Tower. The nearest metro station is Passy. It opened in 1984.
The museum testifies to the richness and diversity of French winemaking by showcasing the tools and objects used to process the vine and wine. The collection is presented in an antique setting from the Middle Ages and later housed in the storerooms by the Tiny Brothers of the Passy Monastery. 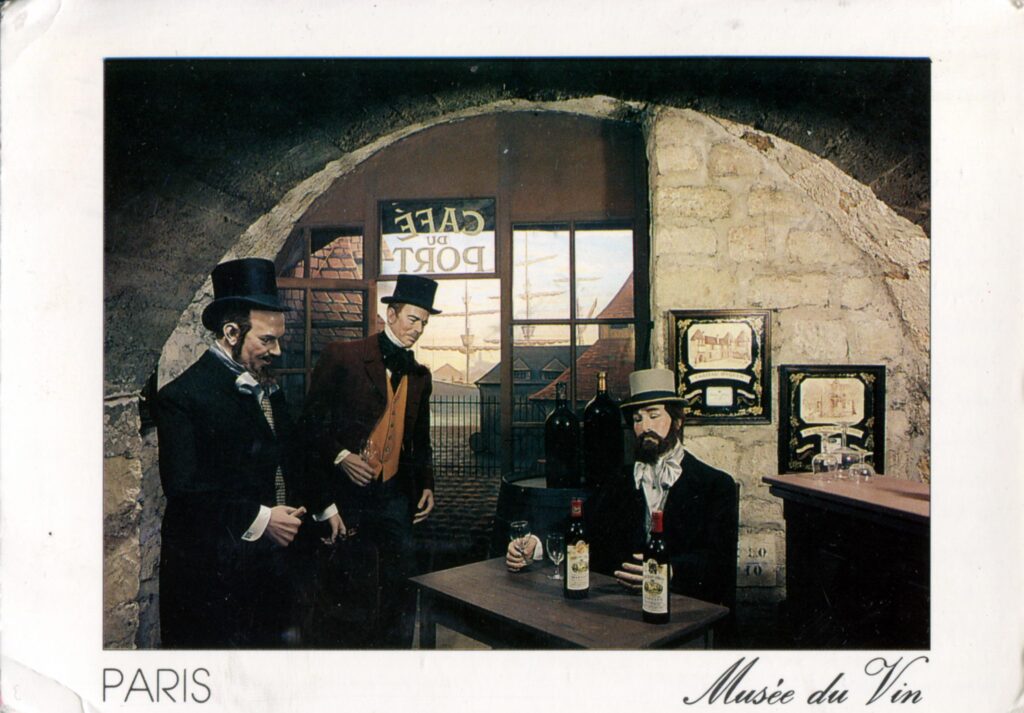 Wine museum in Paris in the post card (author collection)

Previously, the hill on which the winding galleries of the Wine Museum are located was covered with a huge oak forest. Around the 6th century, on the heights of Chaillot, the village of Nigeon grows with its crops, vineyards and quarries.
Monks settled here in 1493. The territory of the settlement expanded to the modern Water Street (Rue des Eaux). The construction of the Abbey of Passy began. The monks cultivated several acres of land in a closed street, the existence of which today reminds us of the wine road. On the hill they discovered ancient quarries, where they built the cellars of the abbey.
Since the 17th century, the Rue des Eaux (Waters) has been an open source and allows visitors to enter the museum. The name of the street refers to the mineral waters found here, which were very popular until 1785. Today, visitors can look at it through the well. The French Revolution of 1789 destroyed the religious orders in 1790 and ended the life of the abbey, which was gradually falling into ruin. Reopened a few years ago, the Wine Museum became available to the public in 1984.
Description.
The Wine Museum is located in the old medieval quarries, which were used as cellars in the 15th century. The brothers from the monastery of Minimes (Passi) then produced wine, very popular with King Louis XIII, from grapes harvested on the slopes of the Seine. Water Street, where the museum is now located, got its name from the discovery in the 17th century of hot springs, which were used for 200 years. The wine museum has been owned since 1984 by the Conseil des Echansons de France, a wine fraternity that brings together wine lovers in France and abroad, and whose goal through the museum is “to protect and promote the best wines of French origin with a denomination” (“appellation” d’origine controlée “).
Restored after 1950, the former cellars of the Minims Monastery served for a time as cellars for the restaurants of the Eiffel Tower, and then turned into the Wine Museum, owned by the Conseil des Echansons de France since 1984. The wine fraternity, founded in 1954, strives to protect and promote the finest French local products. To this end, he organizes many prestigious events in France, abroad and in the museum. It brings together thousands of professionals and amateurs around the world, who ensure that the experience and quality that make the world famous French wines is preserved. The “Conseil des Echansons de France”, which manages the museum, offers to any public a wide range of cultural events and activities dedicated to the vine and wine; and visiting galleries where his collections are displayed. The collection is displayed in the galleries under Passy Hill.

A rich collection of more than 2,000 pieces is represented by viticulture, winemaking and wine tasting tools. The oldest of them date from the first century before the birth of Jesus Christ and date from the last period of the 19th century. Wax figures, some of which are historical, such as Napoleon, Pasteur or Balzac, depict items from the collection.
In France, over two thousand years of experience have led to the creation of world famous wines. Generations of vintners, master vintners, coopers and wine experts continue to refine their methods to produce the most prestigious wines. This exhibition pays tribute to their profession. It offers visitors the opportunity to recognize or discover traditional instruments, sometimes unusual, often overlooked, that are now part of the French heritage. Many of them are actually no longer used and are now kept in private collections and museums. They show future generations the ingenuity of their inventors and the skill of those who have mastered their use.
The exposition includes:
– Vine Tools
– Wine Vault
— cooperation
— Wine and oenology
— Items for serving and wine tasting
— Traditions of the country