Best private city sightseeing tours in Paris are designed, first of all, to quickly and clearly, in a “military style” in 3-4 hours, acquaint you with the topology of the capital of France, help you immediately remember where everything is so that in the future the traveler would be able to navigate independently around town. The second goal, no less important, is also to briefly and clearly tell about the history of the most important sights of Paris. You can visit here many times, especially for business purposes, but never get to know the important moments in the history of famous corners and regions. For those who already know where everything is in Paris, a sightseeing tour with a professional tour guide helps to increase their knowledge of the country’s culture and history. Therefore, the name “sightseeing” tour is written conditionally, and its program can and should be drawn up accordingly both for those who are in Paris for the first time and for those who have already been here several times. Experienced tour guides themselves take into account gender, age and, of course, the wishes of clients, and in accordance with this they themselves adjust the excursion program. Especially if the trip is ordered for parents with children or even for the children themselves and schoolchildren of different ages and thematic bias. Below is a suggested typical itinerary as a one-stop-shop for those who are visiting Paris for the first time.
Recommended route. Description. During the tour you will see the Eiffel Tower – the symbol of Paris. The guide can show it from the most popular viewpoints, as well as from unusual angles. One of the advantages of individual (which sometimes means even a whole minibus, if it is a company of friends or relatives) excursions is that you can be shown and given the opportunity to take a photo not only from a “strictly laid” viewing place, but from any angle along Your desire, including from some unusual place. You can always adjust the program and route at any time. And even ask the driver to wait until, according to the old tourist “tradition”, you suddenly wish to “drink champagne or French wine”, marking your arrival. You are on vacation. Your guide and driver are, first of all, your friends who are sympathetic to the wishes of travelers, which makes getting to know the city in a friendly, sometimes even more than friendly, atmosphere (when after the end of the “big booze” the bodies are delivered to the hotel) :- ). The guide will always also tell you where to go for dinner in the evening after the tour to a restaurant located both in the center and in the area of ​​​​your hotel. It is recommended to guess the start and end time of the tour so that at the end of the tour you will be taken not to the hotel, but to some cozy cafe or restaurant.
And so, the Eiffel Tower, as already mentioned, has many beautiful and unusual views. If you want to take very beautiful photos, both in the “selfie” class and with the help of a guide from a distance, just tell your companion about it.
The tour also passes along the Champs Elysees, connecting the Arc de Triomphe and Place de la Concorde. Very interesting stories and “the latest gossip” about this main street of Paris, about the various exhibitions, fairs, salons that take place on it. What kind of shops are there, where to buy what, where to see the latest car market in showrooms, which are almost one and a half hundred years old (!) – this is also the history of Paris.
We know the love for cars of the inhabitants of the USA, Canada and Australia, so we will definitely show you the best car dealerships during your trip to Paris, so that later you can visit and “inspect” them yourself. We also offer the visits to vintage car museums on our trips from Paris to Champagne, Normandy and the Loire Valley.

Triumphal Arch and Tomb of the Unknown Soldier with eternal flame. Such places are visited with pleasure even by officials with semi-official visits. Formal or informal patriotism. At your request, we can drive a little behind the Arch and see the area of ​​​​embassies, including the Russian one (where the top floor was occupied by the KGB, described by some former employees as “traitors” to the Soviet homeland)
From the Arc de Triomphe (Etoile Square) is relatively close to the Madeleine – the Church of St. Mary Magdalene and the standard of French classicism architecture. This building is interesting up close, but it is part of the architecture of the Place de la Concorde. It is very interesting to see Madeleine up close, and then after the “lap of honor” and from the side of the Seine. Near the Madeleine is also Place Vendôme, the former Louis the Great with a pillar in the middle, somewhat reminiscent of the Alexandrian pillar near the Winter Palace in St. Petersburg. There is also “shopping” here, but the cost of these diamonds sometimes does not fit into the budget of a trip to Paris. Cartier boutique and Chanel head office. Shine and poverty constantly side by side in the capital of the fifth republic at every turn. The right side of the square is occupied by the house N15 – the Ritz Hotel, in which Coco Chanel has lived for the last 37 years. Princess Diana also left this hotel on her last journey.
Not far from the Madeleine there are many beautiful old buildings and structures. Closer to the Opera, you will be shown Olympia, both a concert hall and a café of the same name. 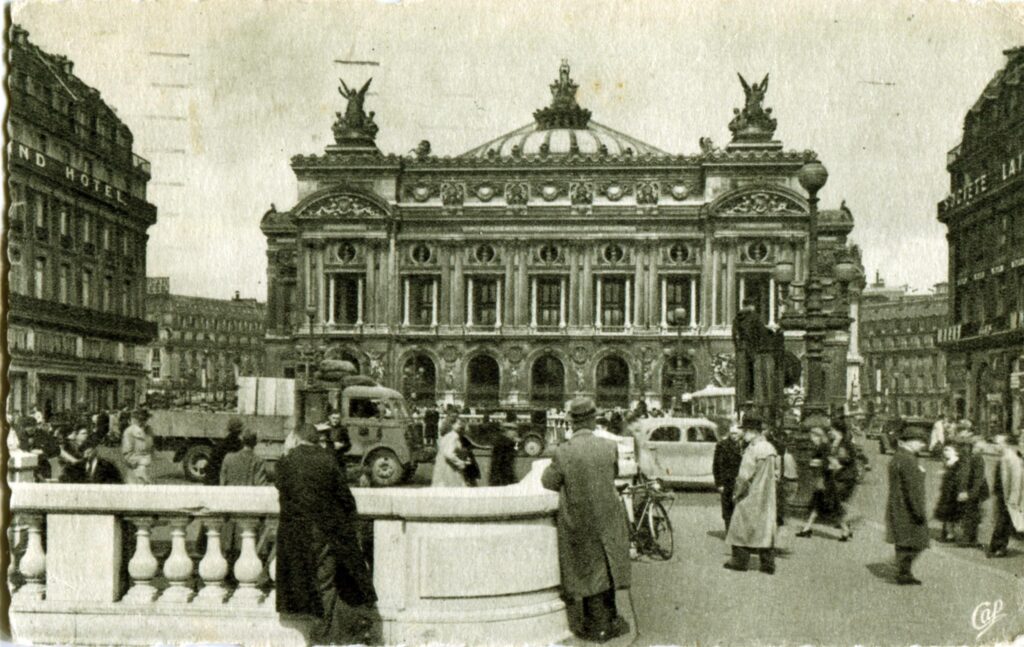 The Opera itself, with the prefix Garnier by the name of the architect, is the tourist center of Paris. All excursions start from it, tourists make appointments here. To one side of it are the Boulevards, which are worth walking along in the evening and, of course, sitting almost ritually in a restaurant (these are such “traditions” that are already over a hundred years old). In the “background” of the Opera, the wide Rue Lafayette begins, which gave its name to the world-famous galleries (large shopping arcades with the most fashionable things). After a day’s exploration of the Galeries Lafayette, you will be advised to come back later on your own for shopping or in the evening to admire the sparkling lights and the huge light board.
Closer to the Seine at the Tuileries Garden is Place de la Concorde (“Concorde”), which offers a magnificent view of the Champs Elysees with the Arc de Triomphe in the distance, as well as the Madeleine already seen in the background. The buildings of the state structures of the country are also visible on the square. Few people know, but in the first half of the 20th century, these buildings housed a powerful professional Union of Russian Taxi Drivers. The Russian speech of drivers with one or even two higher educations (!) Was a common occurrence in these places. Real Russians fled from the criminal government in Soviet Russia, from the NKVD-KGB, from the “Great Terror” and formed a powerful diaspora of the former peoples of the former Russian Empire. But even now you can find Russian words here. Bridge of Alexander III, Emperor of All Russia, a symbol of Russian-French friendship and partnership, when Russia was an ally of France, England, USA, Canada, Australia during the First World War. This was and ended the real Russia. The real Russia went into exile and assimilated with the French. Stalin made a fake “Russia” and a fake “Orthodoxy”, but this is a separate story about Russians without a Homeland. Near the bridge with the same name Alexander III, you will see the embankment with moorings for pleasure boats and traditional floating French restaurants.
A little further from the Seine, Les Invalides is visible, it is also the Museum of the Army and the Cathedral. Napoleon’s tomb, ancient cannons, barracks and a moat speak of the age of this amazing place. Further you can see the Ecole Militaire (Military School), and the Musee d’Orsay opposite which the doors of the Museum of the Order of the Legion of Honor, little known to tourists, are open.
For more than a century, there has been a spontaneous hangout of artists and souvenir dealers on the embankment towards the Cité, having passed (or you can stop and buy a plan of Paris WOW a century ago) we get to an island in the middle of the Seine with the famous Notre Dame Cathedral. Looking ahead, where else will be written about what cafes or restaurants mean for the French and experienced tourists, I can say that there are excellent Bistros with first-class mulled wine near Notre Dame de Paris, which is almost indispensable during an excursion in winter or in bad weather .
By the car, you can go around the entire island of Cité very quickly. Having moved half of the Seine, we find ourselves in the old quarters and visit the oldest Place des Vosges in Paris, once called the “Royal”. Not far from the infamous fortress-prison Bastille. The district, by its statute, resembles the Winter Palace and the Peter and Paul fortress-prison in Petrograd. Only unlike the fortress of Peter and Paul, the Bastille was not only taken, but also destroyed. Down to the foundation. Politically and historically literate people know the “special” role of wine in revolutions and pogroms. Historians have finally begun to sometimes admit that the goal of the majority of those who stormed the Winter Palace in Russia was not the first floor with the ministers, but the cellars of the collection of royal wine, but this is another story. In France, we will not talk about drunken revolutionaries, but we will have to talk about the cultural traditions of the cupbearer and the role of “eat and drink”. This is also part of the history of France. 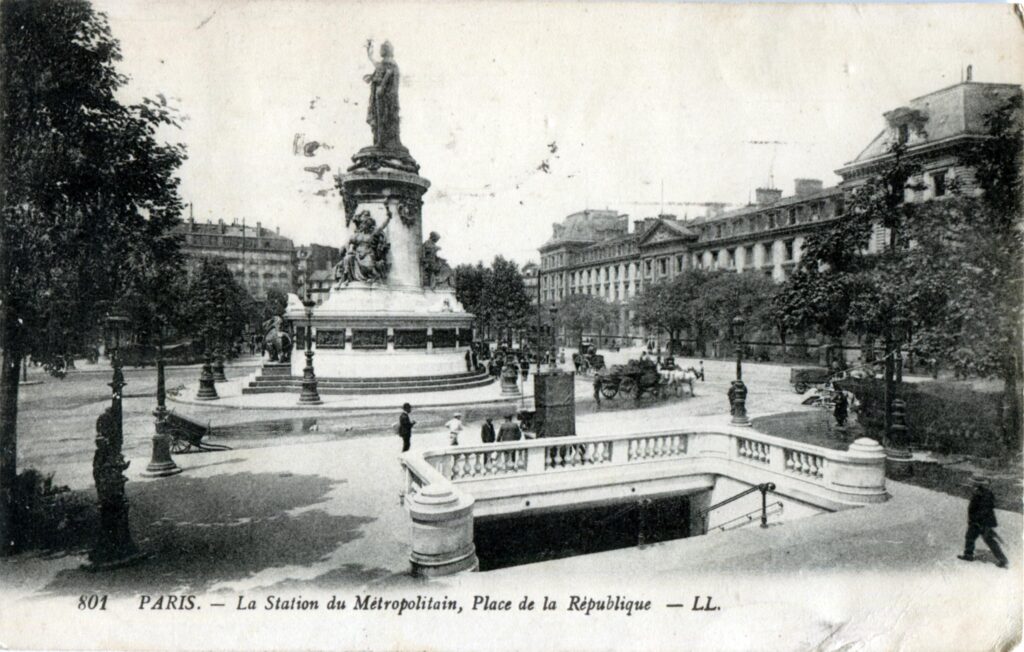 Cafes and restaurants in Paris. Their role in the life of the French is impossible to describe. National pastime, discussing the news, chatting with friends, clubs of interest. The Frenchman likes to go to a cafe, order a cup of coffee with a glass of wine and sit all evening with this “big order” in a bar, reading a newspaper or chatting and chatting. At the beginning of the 20th century, cafes and restaurants in Paris were used not only by Russian artists and artists, but also by revolutionaries as meeting places and work for opposition parties.
During the tour you will be shown the literary and bohemian quarter of Saint-Germain and the cafe “Les Deux Magots”, often flashed in the films. Oscar Wilde’s favorite café. Elsewhere, Le Dôme Café hung out and drank… excuse me, Lenin and Trotsky himself were “active in revolutionary work.” And the very name “House” is something not very French.
During the tour, you will definitely see that Parisian cafes are a whole culture, the pride of the nation and its national idea. Cafes and restaurants are a city within a city. Each quarter is an interweaving of different styles and directions from ultra-modern to vintage cafes with centuries-old traditions. They have their own terraces and showcases, their own Parisian music and signature aroma. Antique pieces of furniture or paintings on the wall make the restaurants look like small living history museums.
A sightseeing tour can be ordered several times, changing the program so that it smoothly turns into a thematic one. You can break it into several parts, systematically and methodically “mastering” different parts of the city day after day. And it is traditional to end the trip in the late afternoon, following the example of the Great Leader of the world proletariat, Comrade Lenin, in a restaurant in one of the quarters of Paris.
To be continued soon.

Historical views of these sights in old photographs from the authors’ collection. 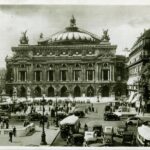 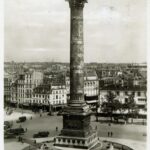 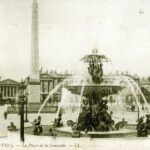 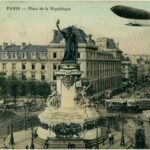 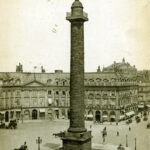 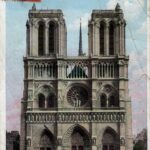