A Brief History of Giverny: the archaeological excavations at the site of Giverny testify that people lived here in the Neolithic times. During Roman rule, there was already a settlement here. During the reign of the Merovingians, the Church of St. Radegunda appeared. In 863, Charles II “bald” recognized the possession of Giverny by the monks of the abbey of Saint-Denis-le-Ferman. In the 11th century, Giverny and the church were returned to the abbey of Saint-Ouen in Rouen. In the Middle Ages, the village also belonged to the vassals of the abbot of Saint-Ouen. There were many monasteries in the area. After the revolution, the owner of Giverny, Mr. le Laurier, became the first mayor of this town (since 1791). Since 1883, the famous artist Claude Monet settled here and lived until his death in 1926.

The Gardens and the parks in Giverny.
Claude Monet lived in Giverny for 43 years and created an amazingly beautiful garden with his own hands. Using his artistic knowledge, he made the manor a great work of art, using the play of the rays of the sun and achieving different lighting depending on the time of day or season of the year. Magnificent artistically overgrown flower beds with many flowers of white, red, pale blue and yellow, according to all the laws of harmonic combinations, are among trees and shrubs that create chiaroscuro like in painting textbooks.
A long picturesque alley with village houses and thickets of grapes resembles either training paintings for artists, or corners of Film Studio for outdoor shooting of the 19th-20th centuries. This is what attracted Monet’s friends, also famous artists, to visit here for the work. If we also assume that in such a garden they not only went on an excursion, but drank good French wine in nature, then one can imagine what creative inspiration they received from the garden and the atmosphere.
The famous pink (!) house with green (!) shutters and creaky stairs contributed a lot to creative “inspiration”. This is how the audiovisual series and multimedia interactive for artists turned out, which art lovers can repeat exactly now. 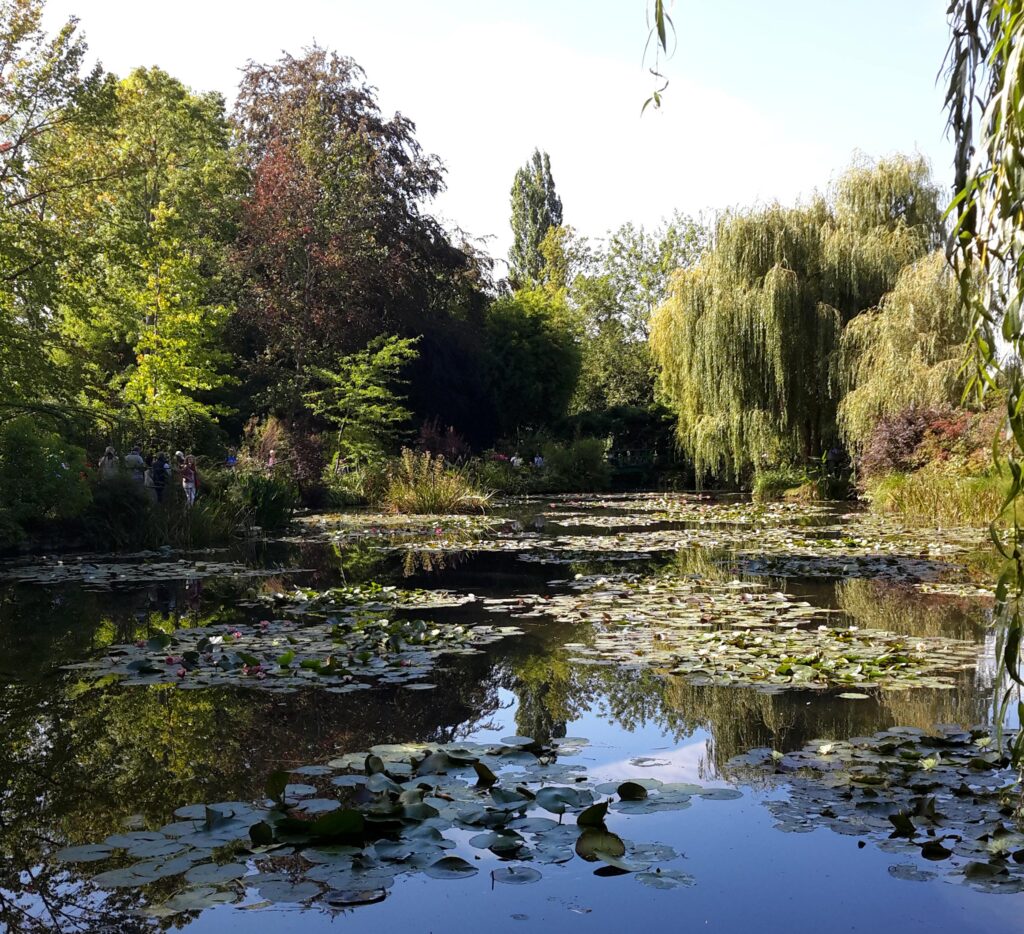 Garden and the pond with water lilies (Claude Monet museum)

Part of the park was built by him in the style of the Great East, is called the “Water Garden” and consists of a lake with water lilies, a Japanese “irregular” asymmetrical bridge and even a bamboo grove. All this inspired and helped the artist to create his works with bright colors in an oriental style. Artist friends were also inspired by such water lilies and garden views.
When Monet acquired this hectare of land, a branch of the local railway passed through his site (well, we have railway workers everywhere). Over time, it turned into a strategic highway 🙂 and divided the park into two parts. Unfortunately, it gradually transformed into an eternally clogged highway, dividing the park into two separate territories. In 1966, the artist’s son Michel bequeathed the garden and the estate to the state. The museum “Musée Claude Monet” was opened in the house. 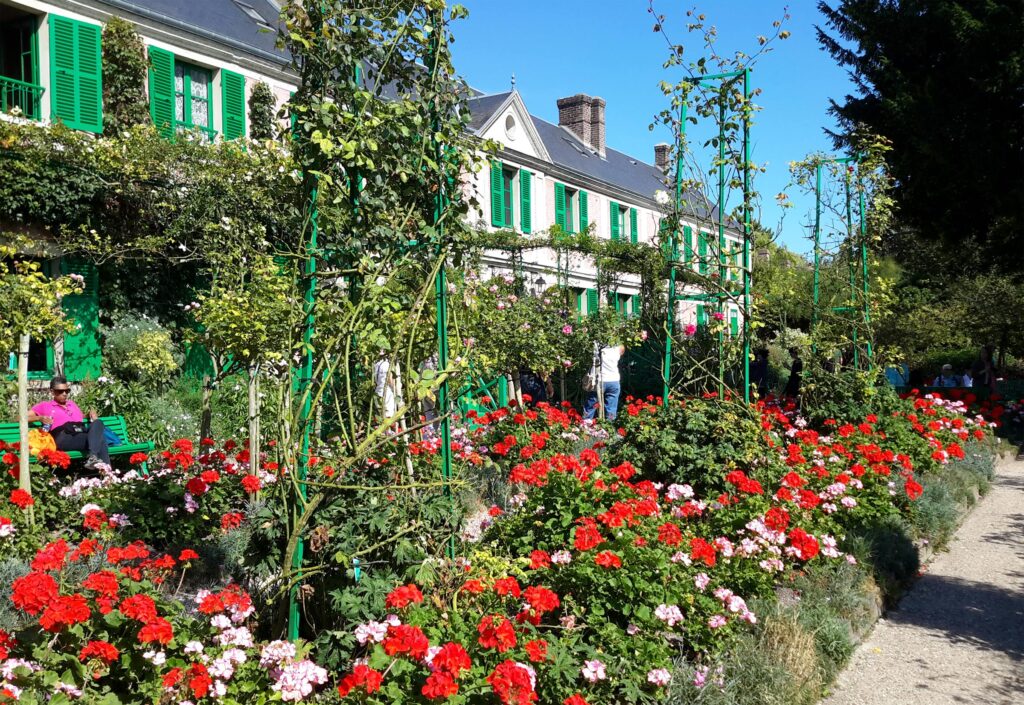 Claude Monet House in the Garden (Tours from Paris)

The House-Museum of Claude Monet in the Garden
In the northern part of the park (Clos Normand) is the artist’s house-museum – a building painted in an idyllic pastel pink color. The rooms inside the house are also painted in different colors, and the walls are decorated with a magnificent collection of Japanese prints, collected by the artist himself, including works by Hokusai and Hiroshige. The famous art studio “Water Lily” is a hall of the museum with beautifully executed reproductions of Monet’s works.
An underground tunnel under the highway leads to the southern part of the park. Once it was a swampy area, which Monet drained in 1895 and built that pond with water lilies here.
Here the famous artist created his world-famous paintings, such as “Water Lilies” or “Rack at Giverny”. Rouen Cathedral in the evening, Rouen Cathedral in the moonlight, Mannport Gate in Etretat, Rocks in Etretat were also painted in this paradise (just some kind of “appendix” to our excursions to Normandy. Some of his paintings are now in world museums, for example, in the Pushkin National State Museum (Moscow).It is useful to go and see his works before or after the tour in order to compare with “nature” in the estate.
Even during the life of the artist, in addition to his friends, young people began to gather in Giverny to learn fine art from the masters of the “new style”. There was a whole artistic colony of Germans, Czechs, British and especially Americans.

“House of the American Artists”
The first hotel in the world that appeared since then, especially for artists, had everything for painting – two studios under the roof with huge windows facing north. Founded by Madame Angelina Bodie, the hotel was given the unofficial name of “Houses of American Artists”. In accordance with the “traditions” of young and poor artists, they often paid for their accommodation and meals with their works or sketches.

Impressionist Museum Restaurant
Today, this hotel building houses the Hotel Baudy restaurant, which contains a collection of impressionists by the same artists who arrived in Giverny to study. Guests, as before, are treated to authentic French cuisine according to the recipes of Madame Baudy herself. The interior and antique furniture have been preserved since then.

World War I, Normandy and Giverny.
Nothing “good”, like the Second World War itself, was brought to Monet’s estate and garden. The consequences of these misfortunes were fully restored through the efforts of enthusiasts who organized the Claude Monet Foundation.

Modern VIP guests
In 1996, Hillary Clinton visited Giverny on a tour, and in 2007, Japanese Emperor Akihito.

Reviews about the excursion, the photo gallery.
Gallery of photos from the excursion to Giverny from Paris, made by A.B. in the beginning of September