Disneyland Paris, which until 1994 was called “Euro Disneyland”; Until 2009, Disneyland Resort Paris is a whole complex of amusement parks from the Walt Disney Company 32 km. east of Paris in the city of Marne-la-Vallee (Marne River Valley). The total area is about 1943 hectares. It is a favorite holiday destination for tourists from all over the world, including from Russia with an annual attendance of more than 12 million people. The park was officially opened on April 12, 1992 (? especially on the Day of Russian Cosmonautics 🙂).
Disneyland Paris includes: two theme areas: “Disneyland Park” (since 1992) and “Walt Disney Studios Park” (since 2002), the “Disney Village” entertainment land, the “Golf Disneyland” course, as well as various hotels and business centers. 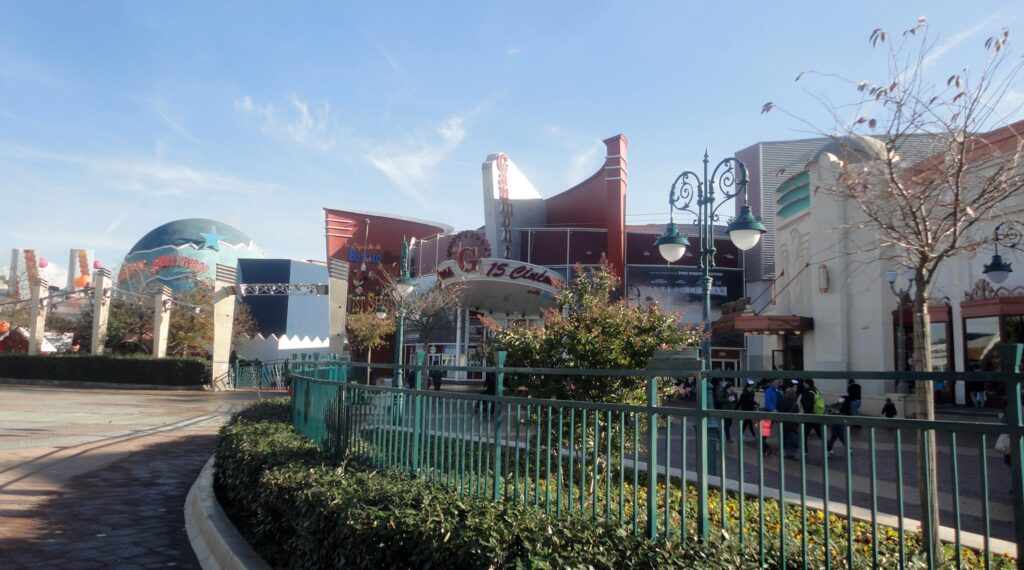 Disneyland Parks
Disneyland Paris includes five theme parks located around the Sleeping Beauty Castle, which is the symbol of Disneyland.

Adventure land
Here you can see Robinson’s dwelling on the branches of a large tree, an adventure island with labyrinths and a pirate base, and see how the pirates attack the fortress. There is also an opportunity to take a tour of the pirate ship.
The best rides in Adventureland: Indiana Jones and the Temple of Peril (based on the movie Indiana Jones and the Temple of Peril), Adventure Isle, Swiss Family Robinson treehouse and Pirates of the Caribbean. This last attraction prompted Walt Disney Studios to create the famous Pirates of the Caribbean film series of the same name; many of the plots of which were borrowed from the attraction. After the release of the film, this attraction was updated and even supplemented with some of the scenery from the film.

Frontier land
Includes the Big Thunder Mountain rollercoaster ride and the Phantom Manor haunted house. Everything here is made based on the films in the style of “Westerns” and inspired by the spirit of the Wild West. You can take a tour on two authentic steamboats, meet cowboys and Indians, and even shoot at the Rustler Roundup Shootin’ Gallery. There is also a small zoo with appropriate types of animals.
Disney characters can be found at the Pocahontas’ Indian Village playground, Tarzan – The Show, and Mickey’s Winter Wonderland.

USA Main Street
“Main Street” begins immediately after the entrance to the “Disneyland Park” and consists mainly of stylish shops and restaurants. The street is built in the style of a classic American town of the late 19th and early 20th centuries, while the architecture strongly resembles the architecture of the city of Marceline, Missouri, where Walt Disney grew up. The road leads to the Sleeping Beauty Castle, from where you can then get to the rest of the park. Narrow-gauge trains with steam locomotives depart from the station along a circular track around the park. There is also a hairdressing salon in the historical style.
Main attractions: Disneyland Railroad – Main Street Station (railway and train station), Main Street Vehicles (vintage cars – old timers transporting visitors), Discovery Arcade and Liberty Arcade (walking arcades and nooks and crannies). Disney Parade (the official Disney parade), FANTILLUSION! (night light parade) and Wishes (a short version of the most famous fireworks in the world, over Sleeping Beauty’s castle).

Discovery land
The land of discovery shows the future imagined by Jules Verne (see also Nantes, the walking elephant and the machines of the island). This part of Disneyland was deliberately made in the style of the future based on the works of science fiction writers of the 19th century. In the center of Discovery Land there is a rollercoaster (Space Mountain), which by its tenth anniversary (in 2005) has changed and improved several times. Now the attraction is called “Space Mountain: Mission 2” (Space Hill. Mission2). Since 2005, The Legend of the Lion King, a 30-minute musical, has been staged next to the attraction.
Other attractions in Discovery Land include: Buzz Lightyear Laser Blast (an interactive Dark Ride), Star Tours (Space travel), Orbitron (a rocket carousel) and Autopia (a go-kart track with petrol vehicles).

Fantasy land
Fantasyland is aimed at children. The rides are adapted plots from popular children’s fairy tales. The most famous is the Sleeping Beauty Castle in the center of the park, under which is the Dragon Cave (La Taniere du Dragon).
The attraction “Snow White and the Seven Dwarfs” tells the story of Snow White and contains elements of the “road of horrors”. Peter Pan’s Flight (Peter Pan’s flight) is a funicular on which you can fly over the roofs of London. Alice’s Curious Labyrinth is also located here. Pinocchio’s journey tells about a liar boy, and while riding a boat you can watch the performance “The Land of Fairy Tales” (French: Le Pays de Contes de Fées), based on the fairy tales “Snow White”, “Peter and the Wolf”, “Aladdin” , “The Little Mermaid”, etc.
It’s a small world is an attraction with singing children of different nationalities. Every region of our planet is represented here.

Walt Disney Studios Park
This park was built in 2002 and is adjacent to Disneyland Park and Disney Village. Here, visitors can see how the film industry works, how special effects are made, for example, in the Studio Tram Tour with a demonstration of all the technology. In the Cinémagique show, you can see excerpts of a love story. The Moteurs…Action! show, on the other hand, introduces viewers to stuntman ship.
This park has a nook in memory of the rock band Aerosmith: the Rock ‘n’ Roller Coaster ride, accompanied by an Aerosmith soundtrack. Since 2006, this attraction has overtaken in attendance; another attraction “Big Thunder Mountain” and became the leader of Euro Disneyland.
For the 15th anniversary of Disneyland in 2007-2008, Walt Disney Studio Park got four new rides. In June 2007, the Spinning Coaster Crush’s Coaster, inspired by Finding Nemo, and a teacup-shaped attraction for the Pixar cartoon Cars opened.
One of the main attractions of the park is the attraction “Hollywood Tower Hotel”, which can be seen several kilometers from the park. In the high-speed elevator of this attraction, the creators send visitors directly to the Twilight Zone.
The park has several specialized cinemas – Cinemagic, Animagic and Art of Disney Animation.
Attraction Stich: live! in French or English allows you to talk in real time with the character of the cartoon of the same name on a huge screen.

Disney Village
The town of 20 football fields is open to visitors even after the closure of other parts of Disneyland. There are numerous shops, restaurants, a discotheque and a cinema complex. Nearby there is a bowling center and a private covered car park. Three branded Disney stores offer almost all the souvenirs that can be purchased at Disneyland itself.
How to get from Paris