What to see in Toulon in 1 day tour from Nice or Cannes, main sights, museums, fortresses, places of battles of the Second World War. 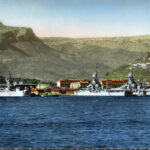 Naval base (postcard after WW2)

Toulon is a port city and the largest naval museum and base of ships in France
Toulon (French Toulon, ox. Tolon, lat. Telo Martius) is a city in southern France, on the Mediterranean coast, at the foot of Mount Faron. Population – 160,639 inhabitants (1999). The city is the prefecture (administrative center) of the department of Var and the district of Toulon.
Toulon, a brief history. Toulon was founded by the Phoenicians, who mined purple dyes here. In Merovingian times, Toulon was the seat of a bishop; the first of the local bishops is called Saint Honoratus. In 889, Toulon was badly destroyed by the Saracens, but Count William I of Arles rebuilt it. Since 1032, Toulon was ruled by the counts of Provence, in 1178, 1196 and 1211 it was besieged and destroyed by the Saracens. After the annexation of Provence to France, King Charles VIII, having heard about the natural merits of the Toulon harbor, launched the construction of a major port. These plans were thwarted by the Genoese, who were afraid of losing their monopoly on maritime trade in this part of the Mediterranean. In 1514, construction was resumed by Louis XII, who saw in Toulon a potential springboard for the Italian wars. A reminder of his contribution to the development of Toulon is the Royal Tower rising on the spit of the cape (1514-24); immediately upon completion of construction, it was taken (or rather, bought from the commandant for 500 ecu) by Constable Bourbon. In 1536, Emperor Charles V visited Toulon. A few years after the joint siege of Nice, King Francis I allowed the pirates of Barbarossa to spend the winter in the Toulon Bay; the local cathedral was used for the administration of Muslim worship. In 1599, Henry the Great resumed the construction of the port in Toulon, then its port facilities were greatly improved and expanded by Cardinal Richelieu. Colbert also understood the key importance of Toulon in maintaining French dominance in the Mediterranean. Under him, large construction and fortification work was carried out in the city, which was led by Vauban himself. The city was so well fortified that during the War of the Spanish Succession, in 1707, it withstood the siege of Prince Eugene of Savoy. In 1793, the career of Napoleon Bonaparte began with the suppression of the royalist uprising in Toulon. Throughout the 19th century, the French relied on Toulon to expand their colonial empire. It was from here that all naval expeditions under the French flag began – such as the conquest of Algeria. Baron Haussmann, who ruled Toulon before being transferred to Paris, transformed the upper city by laying wide landscaped boulevards with high-rise buildings. Under him, Toulon was adorned with an opera house, the second largest in France, and public gardens, which bear the name of the Russian Tsar Alexander I. Admiral Avelan.

During the Second World War, on November 27, 1942, most of the French navy was sunk in the harbor of Toulon – a total of 77 ships. Toulon was badly damaged during the war, but in general the old city has been preserved – a pedestrian zone from the time of Louis XIV with narrow streets, small squares and numerous fountains. The main attraction in this part of the city is the Toulon Cathedral, founded in the 11th century, but completed only under the “Sun King”. Since the time of Napoleon, the city has housed the National Naval Museum,
– The history of Toulon in more detail and its naval port
The port of Toulon hosts France’s most important naval base.

How to get from Nice, Cannes, airport.