The Tuileries Garden (French: le jardin des Tuileries) is a public park in the center of Paris, in the 1st arrondissement, a favorite place for all tourists, occupies the territory between Place de la Concorde, Rue Rivoli, the Louvre and the Seine; Spread over 25.5 hectares, its length is 920 m and its width is 325 m. 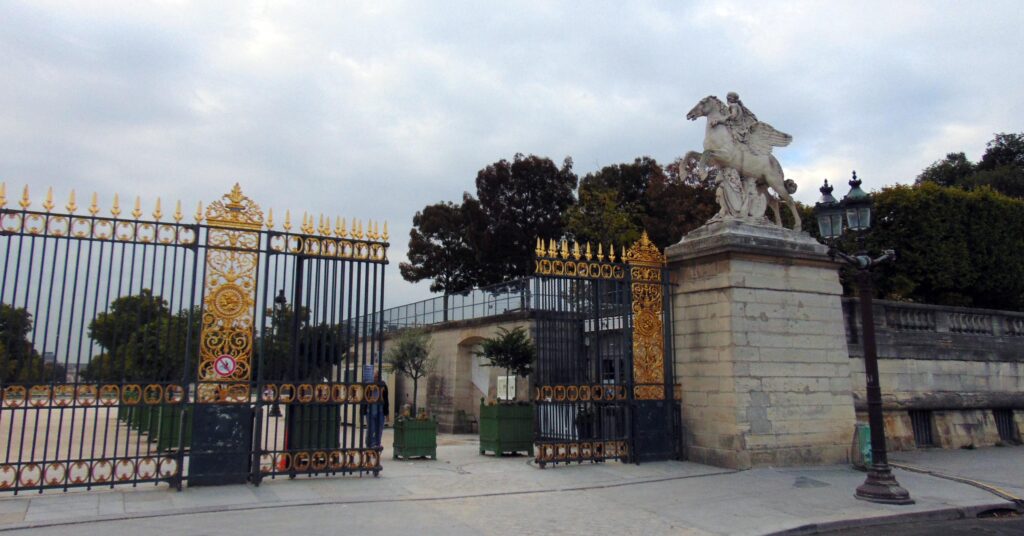 Tuileries Garden Paris – Travel Guide in English and map.
Photo
Once upon a time, the Tuileries Palace adjoined the park. Now the park is the most significant and oldest garden “a la francaise”.
Back in the 15th century, there was the outskirts of the city outside the walls of the Louvre fortress – with a public dump and extraction of clay for the production of tiles (French tuile, “tuile”) – hence the name Tuileries.
In 1564, the primary park began to be laid out on the orders of Catherine de Medici, who wished for a new palace – the Tuileries – and a garden for walking. Therefore, the park was in the Italian style: 6 alleys along the length of the garden and 8 along its width.
In 1664, 100 years later, Colbert ordered the redesign of the park, entrusting this task to André Le Notre.
Virtual garden tour in autumn
In the photo gallery, we showed flowers, trees, interesting corners of the garden, as well as works of art – sculptures of famous masters, made in marble and bronze. Pay attention to the shape of trees and ponds. The photo gallery is interesting in that it captured a temporary flower exhibition from the summer of 2018 until January 2019 by Italian designers and gardeners called “Dreams of Italy”, which was made simultaneously with the exposition at the Louvre Museum.
Interesting historical facts.
Russian Cossacks and the Tuileries Garden
The expulsion of Napoleon from Russia in 1812 ended with the fact that the Russian Cossacks took Paris in 1814 and camped on the Champs Elysees. The Cossacks liked the garden and they constantly walked here and, of course, according to the Russian-French “tradition” they made “drinks”. The stay in the garden of the Cossacks was even captured in the drawings of the Austrian artist Opitz.

Tuileries garden. These are cozy cafes, pony rides, children sailing boats on ponds in the garden. These are old metal benches in a summer park. Strangely, many natives of Paris are unhappy with the Garden. The paths and alleys of the Tuileries are covered with fine gravel, which creates clouds of dust when the wind blows.

The Tuileries Garden in works of art.
In 1876, the garden appeared in Claude Monet’s painting The Tuileries. The artist liked to show “the cycle of insignificant momentary events.” The picture depicts a celebration of life, brightly filled with sunlight. No wonder Monet is considered the founder of the direction of “impressionism” – the transfer of feelings and emotions in painting.
Soviet women once loved the writer Francoise Sagan very much. The hero of her novel A Little Sun in Cold Water was walking through the Tuileries Garden, but for some reason with bad thoughts.
What to see in the Tuileries Garden.

Museum “Orangerie” (Musee de l’Orangerie)
Located in the corner of the garden, close to the Eiffel Tower, near Place de la Concorde. Once it was a winter greenhouse for orange trees, and now it houses a collection of 144 works by Parisian artists of the 20th century. The main attraction of the museum is a series of “Waters” by Claude Monet. The museum was closed for restoration for 6 years, while the two-story building was converted into a one-story building. The roof is made of glass, which has become more like a greenhouse. The museum’s collection also includes works by Gauguin, Renoir, Cezanne, Picasso and Modigliani. Amadeo Modigliani, whose exhibition was held in 2007 in Moscow), is known in Russia for painting a nude portrait of Anna Akhmatova. The poetess often traveled to Paris and is believed to have been Modigliani’s mistress. 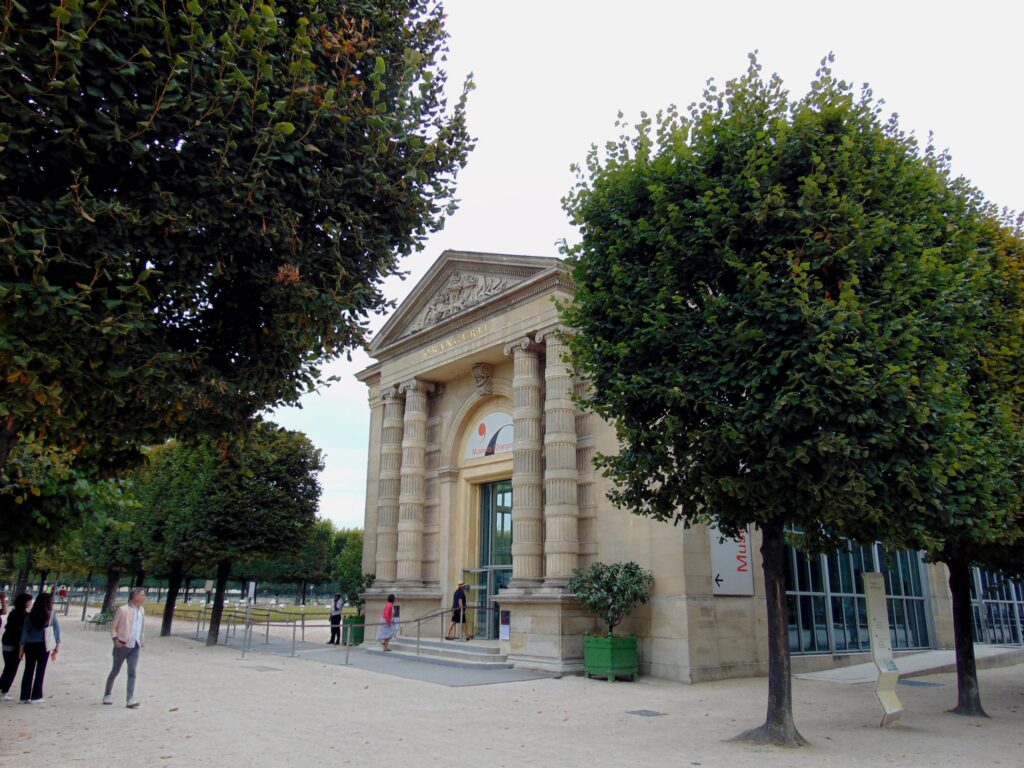 Museum opening hours: 9.00-18.00. Closed on Tuesdays, May 1st and December 25th.
Ticket price: 7.5 Euro, for persons under 25 years old and from 17.00-17.30 – 5 Euro. Audio guide in Russian – 5 Euro. Tickets are free on the first Sunday of each month, for minors, teachers, students of art universities, artists, disabled people, veterans, unemployed (upon presentation of a certificate). Read more about the Orangerie Museum.

Gallery Jeu-de-Paume (Galerie nationale du Jeu de Paume)
The address. 1, Concord Square
It is also located on the territory of the Tuileries Garden – opposite the Orangerie Museum. The gallery hosts exhibitions of works by contemporary artists. Once this building was built by Napoleon III as an indoor sports hall for ball games. The gallery is administratively subordinate to the Louvre Museum.
The gallery is open: Tuesday 11.00-21.00, Wednesday-Friday 11.00-19.00. Monday – day off, January 1, May 1 and December 25 Tickets, price: 8.5 Euro. For teachers, students, people over 60 years old and under 26 years old, large families – 5.5 Euro. Free tickets – for the unemployed, the disabled, journalists, children under 10 (ID required). Students and persons under 26 years old on the last Tuesday of each month from 17.00 to 21.00.
Unofficial information.
The Tuileries Garden is a favorite place for tourists to semi-officially “get drunk”, especially on New Year’s Eve, during the Christmas holidays (as evidenced by the numerous empty bottles of “champagne”) and on holidays. About the “capture of the fortress-prison of the Bastille by the Parisian Communards” and, of course, on May 1, as well as on all other important national holidays of the country. At the same time, they behave quietly and modestly, do not violate public order (because the police are around) and do not even dive into the pool, which is located in the park and do not fight with the Arabs. Order is maintained by the police.
Such an unusual popularity for tourists garden and park owes its location. Getting to know Paris is always better if you walk from your hotel through the center, through this garden-park to the Place de la Concorde and on to the Seine. Usually a walk takes no more than half an hour, but when approaching the garden, tourists already want to celebrate this acquaintance with the city and sit on a bench to study the history of France by tasting a bottle of expensive (!) French wine from plastic cups on a park bench (something they would never do in their city). If you are quiet, don’t scream or dive into the fountain, if you try not to show the bottle too much by wrapping it in the American way, if you don’t violate public order, then the police won’t notice your drinking. The romantic atmosphere of the garden is really conducive to this. Even if the music is not heard, the music of Joe Dassin is always heard in the soul. Fans of walking with a music player can download his songs in advance and, so to speak, more imbued with the spirit of France.
In the Garden (park) there is also a pool with a fountain, as well as many sculptures reflecting the history of France. If you do not take into account the time of gatherings on the bench with romantic pleasure, then from Rivoli to Place de la Concorde you can walk through the park in just ten minutes.
At the end of the Garden in front of the Place de la Concorde, it’s always interesting to see what’s going on. There is a ferris wheel, fun and noise at any time of the year.

Trip advices, the personal experience.
On the border of the Garden and the Place de la Concorde, they usually sell traditional French pancakes (with cheese, ham, eggs and sweets), as well as excellent mulled wine. There is also a toilet here (naturally clean and “civilized”, and not a blue plastic booth like in the country of evergreen tomatoes). There is also a metro station here.
After the Garden in front of Place de la Concorde, you must decide on the further direction of the walking tour
– across the Seine towards the Museum of the Army – the Eiffel Tower
– along the Champs Elysees towards the Arc de Triomphe
– to City Center towards Madeleine Opera
Due to the closure of the “Christmas Village” and entertainment area on the Eltsey Fields, a whole special tourist and entertainment area with attractions for adults and children has recently been equipped in the Tuileries Garden.