Concorde square (French: Place de la Concorde) is one of the main public squares in Paris, France. The area of 7.6 hectares is the largest area in the French capital. It is located in the eighth arrondissement of the city, in the eastern part of the Champs Elysees. It was the site of many notable public executions, including those of King Louis XVI and Marie Antoinette during the French Revolution, during which the square was temporarily renamed “Place de la Révolution” (Revolution). 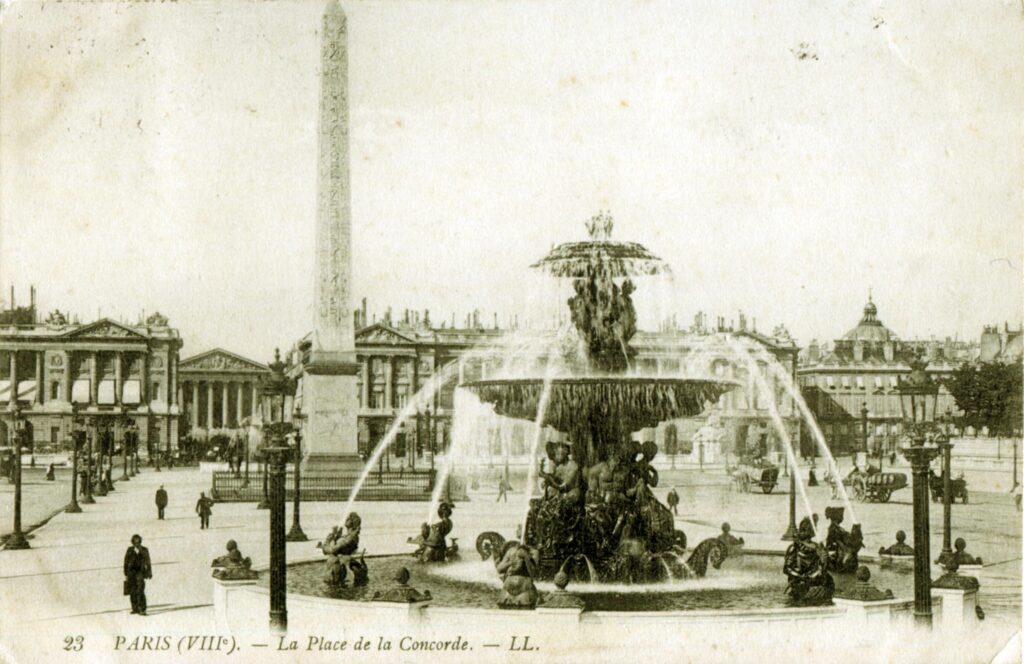 Design. The site was designed by Ange-Jacques Gabriel in 1755 as an octagon with a moated border between the Champs-Elysées to the west and the Tuileries Garden to the east. Decorated with statues and fountains, the area was named Place Louis XV in honor of the king of that time. An equestrian statue of the king was exhibited in the square, which was commissioned in 1748 by the city of Paris, chiefly by the sculptor Edmé Bouchardon and completed by Jean-Baptiste Pigalle after Bouchardon’s death.
In the northern part, two magnificent identical stone buildings were built. These houses, separated by Rue Royale, remain among the finest examples of Louis XV style architecture. The east building originally served as the French Naval Ministry. Shortly after construction, the western building became the luxurious home of the Duke d’Aumont (Aumont). It was later bought by the Comte de Crillon, whose family lived there until 1907. The famous luxury hotel De Crillon, which currently occupies the building, got its name from the previous owners.
Revolution. During the French Revolution in 1789, the statue of the French king Louis XV was demolished and the area was renamed Place de la Révolution. The new revolutionary government installed a guillotine on the square, and it was here that King Louis XVI was executed on January 21, 1793.
Other important figures guillotined on the spot, often in front of a cheering crowd, were Queen Marie Antoinette, Princess Elisabeth of France, Madame du Barry, Georges Danton, Camille Desmoulins, Antoine Lavoisier, Maximilian Robespierre, Louis Antoine Léon de Saint- Just, leader of the Jacobins) and Olympus de Gouges. In 1795, under the Directory, the square was renamed Place de la Concorde as a sign of reconciliation after the upheavals of the revolution. After the Bourbon restoration of 1814, the name was changed to Place Louis XV, and in 1826 the place was renamed Place Louis XVI. After the July Revolution of 1830, the name Place de la Concorde was returned and has remained so ever since.

Concorde Square Description
– To the west of the square are the famous Champs Elysees.
To the east of the square are the Tuileries Gardens. The National Gallery du Jeu de Paume and the Musée de l’Orangerie, both in the Tuileries Gardens, border the square.
– North of the place: two identical stone buildings separated by Royal Street. The Ministry of the Navy is located in the eastern part, and the Hôtel de Crillon is located in the western part. Rue Royale leads to the Église de la Madeleine (Madeleine). – The US Embassy is located in the corner of the square at the intersection of Gabriel Avenue and Boissy d’Anglas Street.
“The northeast corner of the square is the western end of Rue Rivoli.
– South of the site: the River Seine, crossed by the Pont de la Concorde, built by Jean-Rodolphe Perronnet in 1787-1790 and extended in 1930-1932. The Palais Bourbon, which houses the National Assembly of France, was located across bridge across the river.
– At each of the eight corners of the octagonal square is a statue, created by the architect Jacques-Ignace Hittorff, representing French cities:
Brest and Rouen by Jean-Pierre Cortot
Lyon and Marseille – Pierre Petitot
Bordeaux and Nantes by Louis-Denis Caillouette
Lille and Strasbourg by James Pradier. After the Franco-Prussian War of 1870–1871, when Alsace-Lorraine was ceded to Germany, the statue of Strasbourg was covered in black mourning crepe on public holidays and often decorated with wreaths; this tradition did not stop until France regained the region after the First World War.

Obelisk. The center of the square is occupied by a giant Egyptian obelisk decorated with hieroglyphs celebrating the reign of Pharaoh Ramses II. It is one of two that the Egyptian government gave to the French in the 19th century. The other remained in Egypt, too difficult and heavy to move to France with the technology at the time. On September 26, 1981, President François Mitterrand returned the second obelisk to the Egyptians.
The obelisk once marked the entrance to the Luxor Temple. The Khedive of Egypt, or the royal constitutional monarch Muhammad Ali Pasha, presented the 3,300-year-old Luxor Obelisk as a diplomatic gift to France in 1829. It arrived in Paris on December 21, 1833. Three years later, on October 25, 1836, King Louis Philippe placed it in the center of Place de la Concorde. The obelisk, a yellow granite column, rises 23 meters in height, including the base, and weighs over 250 tons. Given the technical limitations of the time, it was not easy to transport it – diagrams were drawn on the pedestal explaining the mechanisms that were used for delivery. The obelisk is framed on both sides by fountains built during its construction on the Square. 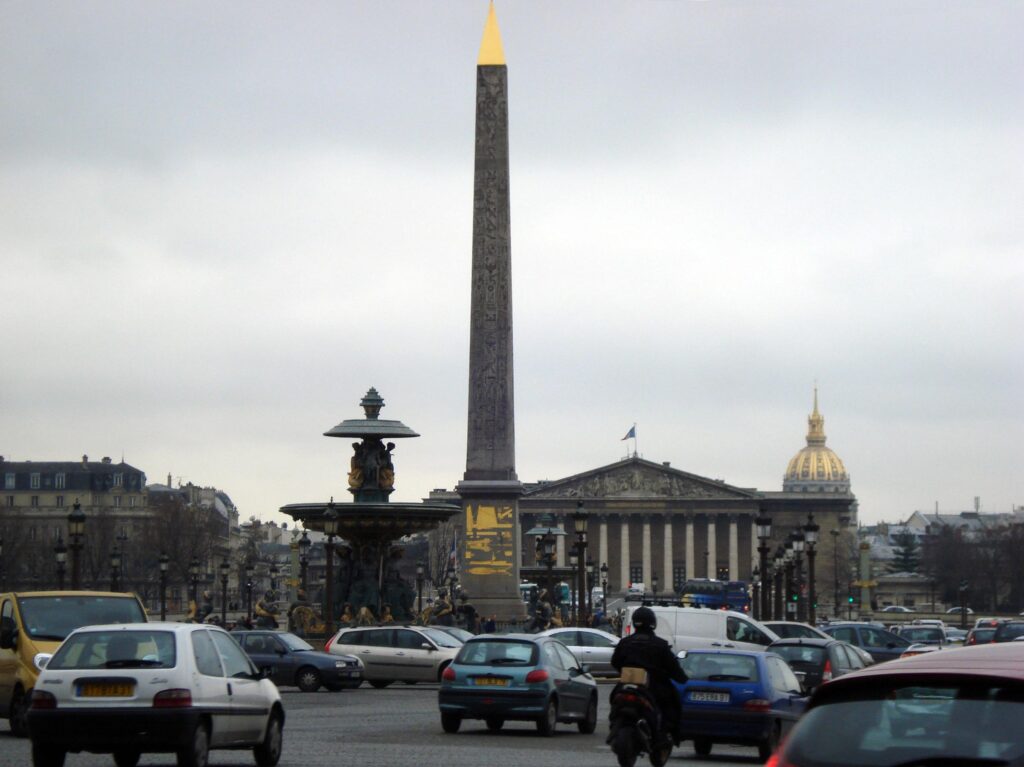 The French government added a gold-plated pyramidal cap to the top of the obelisk in 1998, replacing a missing original thought to have been stolen in the 6th century BC.

Fountains. The two fountains on the Place de la Concorde were the most famous of those built during the time of Louis Philippe, and have become a symbol of fountains in Paris. They were designed by Jacques Ignace Hittorff, a student of the neoclassical designer Charles Percier at the École des Beaux-Arts. The German-born Hittorff was the official architect of the deposed king’s festivals and ceremonies, and studied architecture and fountains in Italy for two years.
The two Hittorf fountains were dedicated to rivers and seas, in part because of their proximity to the Ministry of the Navy and the Seine. Their location on a north-south axis aligned with the obelisk of Luxor and Rue Royale, and the shape of the fountains themselves, was influenced by the fountains of Rome, in particular Piazza Navona and Piazza San Pietro, both of which had obelisks.
Both fountains had the same shape: a stone bowl; six figures of tritons or naiads holding a fish spewing water; six seated allegorical figures standing at the prow of the ships, supporting the pedestal of a round vase; four statues of various forms of genius in the arts or crafts supporting a top inverted top vase; whose water rose up and then cascaded into the lower vascular system, and then into the pool.
The north fountain was dedicated to the rivers, with allegorical figures representing the Rhone and the Rhine, the art of picking flowers and fruits, harvesting and growing grapes; and geniuses of river navigation, industry and agriculture.
The southern fountain, located closer to the Seine, depicted the seas, and the figures depicted the Atlantic Ocean and the Mediterranean Sea; collection of corals; fishing; collection of shellfish; collection of pearls; and geniuses of astronomy, navigation and trade.
Photo gallery.
Practical tourist information.
The initial acquaintance with this place traditionally begins with a city tour with a guide by car or bus. In the following days, tourists are already walking on their own and exploring all the objects on it, combining walks in the Tuileries Garden or the Champs Elysees. Beautiful views of these objects in the evening with illumination.