An official information and our Mini tourist guide with archival photos:

Notre Dame Cathedral (in French Cathédrale Notre Dame de Paris) is a Catholic cathedral in the center of Paris, the geographical and spiritual “heart” of the French capital, located in the eastern part of the Ile de la Cité, on the site of the first Christian church in Paris – the Basilica of St. Stephen, built, in turn, on the site of the Gallo-Roman temple of Jupiter. It was built from 1163 to 1345. The height of the cathedral is 35 m, the length is 130 m, the width is 48 m, the height of the bell towers is 69 m, the weight of the Emmanuel bell in the south tower is 13 tons, its tongue is 500 kg.
The architecture of the cathedral shows a duality of stylistic influences: on the one hand, there are echoes of the Romanesque style of Normandy with its characteristic powerful and dense unity, and on the other hand, innovative architectural achievements of the Gothic style are used, which give the building lightness and create the impression of simplicity of a vertical structure.
An interesting detail. Sculptures of gargoyles were used as drainpipes on the facade. 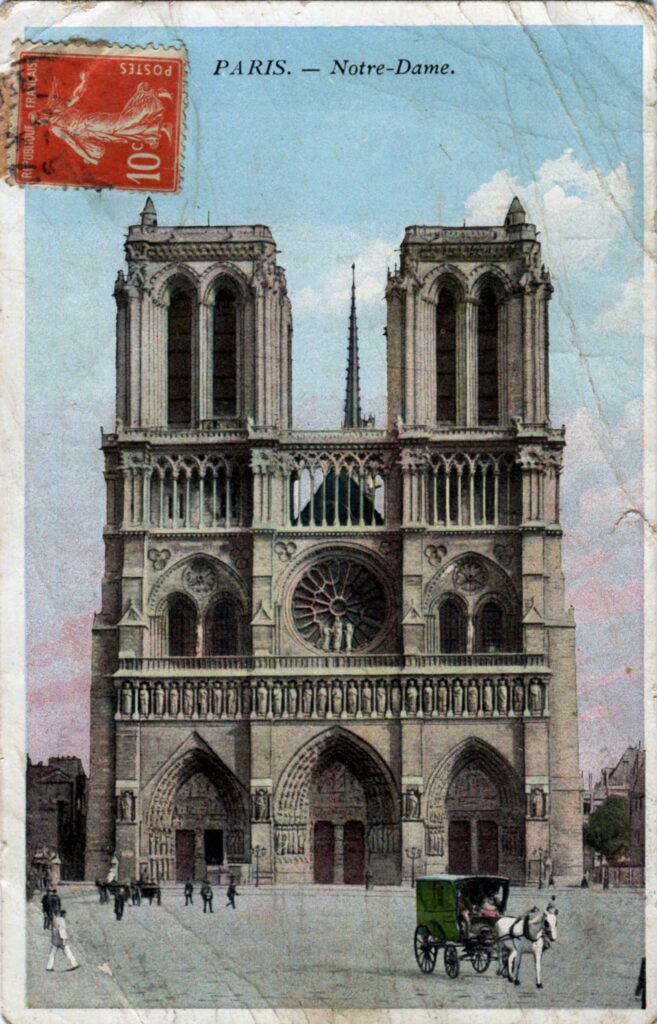 History of the Cathedral:
According to modern archaeologists, there were four different temples on the site of Notre Dame de Paris: (1) a 4th-century Paleo-Christian church, (2) a Merovingian basilica, (3) a Carolingian cathedral (rebuilt after a fire in 857) and ( 4) a Romanesque cathedral. The latter was destroyed to the ground, and the builders used its stones in the foundation of the current structure.
Construction began in 1163, under Louis VII of France. Historians disagree on who exactly laid the foundation stone of the cathedral – Bishop Maurice de Sully or Pope Alexander III. The main altar of the cathedral was consecrated in May 1182, by 1196 the nave of the building was almost completed, work continued only on the main facade. By 1250, the construction of the cathedral was basically completed, and in 1315 the interior decoration was also completed.
Construction of the western pediment, with its distinctive two towers, began around 1200.
Two architects are considered the main creators of Notre Dame – Jean de Chelle, who worked from 1250 to 1265, and Pierre de Montreuil (the creator of the Holy Chapel. He died in 1267), who worked from 1250 to 1267.
Many different architects took part in the construction of the cathedral, as evidenced by the different style and different heights of the western side and towers. The towers were completed in 1245 and the entire cathedral in 1345.
The powerful and majestic facade is divided vertically into three parts by pilasters, and horizontally into three tiers by galleries, while the lower tier, in turn, has three deep portals: the portal of the Last Judgment (in the middle), the portal of the Virgin (left) and the portal of St. Anna (on the right). Above them is an arcade (Gallery of the Kings) with twenty-eight statues representing the kings of ancient Judea.
The cathedral, with its splendid interior decoration, has served for many centuries as a venue for royal weddings, imperial coronations and national funerals. In 1302, the Estates General, the first parliament of France, met for the first time.
A thanksgiving service was served here for Charles VII, who was crowned in Reims. And a century and a half later, the wedding of Henry IV, who was the king of Navarre, and the sister of the French king Margaret de Valois took place.
As in other Gothic temples, there are no wall paintings here, and the only source of color is the numerous stained-glass windows of the high lancet windows.
During the time of Louis XIV, at the end of the 17th century, the cathedral underwent serious changes: the graves and stained-glass windows were destroyed.
During the Great French Revolution, at the end of the 18th century, one of the first decrees of Robespierre announced that if the Parisians do not want “the stronghold of obscurantism to be demolished”, then they must pay the Convention a bribe “for the needs of all revolutions that will still occur with our help in other countries”.
The cathedral was declared the Temple of Reason.
In July 1793, the Convention declared that “all emblems of all kingdoms must be wiped off the face of the earth”, and Robespierre personally ordered the beheading of “the stone kings who adorn the churches.” The bells of the cathedral were melted down for non-ferrous metal, but the largest of them, on the southern tower*, has been preserved. Now he calls on solemn occasions.
The cathedral was returned to the church and re-consecrated in 1802, already under Napoleon.
In 1831, Victor Hugo published the novel Notre Dame de Paris, writing in the preface: “One of my chief aims is to inspire the nation with love for our architecture.”
Restoration began in 1841 under the direction of the architect Viollet-le-Duc (1814-1879). This well-known Parisian restorer also restored the Amiens Cathedral, the fortress of Carcassonne in southern France and the Gothic Sainte-Chapelle. The restoration of the building and sculptures, the replacement of broken statues and the construction of the famous spire lasted 23 years. Viollet-le-Duc also came up with the idea of ​​a gallery of chimeras on the facade of the cathedral. Statues of chimeras are installed on the upper platform at the foot of the towers.
In the same years, the buildings adjacent to the cathedral were demolished, as a result of which the present square was formed in front of its facade.
Gallery of Kings
Stone figures lined up between portals and a tier of rose windows. Those that are now made in the XIX century and depict kings from the Old Testament.
Previously, medieval statues of French kings were located on this site. During the Revolution, they were thrown off and beheaded.
In 1977, while working under one of the houses, some of the statues were discovered. It turned out that during the Revolution, one owner of the house bought them, supposedly for the foundation, but in fact he buried them with all honors and built his own house on this place.

* According to legend, in the 17th century, the Great Bell was lowered from the cathedral and began to be recast. At the same time, the ladies allegedly present took off their gold and silver jewelry and threw them into the mixture for casting. Precious metal additions have made the metal more resonant, so this bell has a clear F-sharp tone. Kolok is called the Great, as it is considered one of the largest in France. Weight – 17.5 tons.

Organ. On the western wall is the oldest organ in Paris from the early 17th century, which has 6000 pipes, 110 pedals and 5 keyboards.
Tour of Notre Dame de Paris Cathedral
Before the fire and the corona epidemic, the Cathedral worked from 8:00 to 18:45. Entrance to the Notre Dame de Paris bell tower cost €7
The current state depends on many factors, stay tuned.
Pulpits were built on the sides of the cathedral (XIX century). Made by “progressive” priests who were trying to push Latin out of the church. According to the canons, one cannot read from the altar in any other language than Latin. From the pulpit, the priests read masses in French, understandable to the inhabitants of Paris. There are also wooden confessionals. According to modern rules, a priest can receive confession from a parishioner of any denomination, thereby becoming a psychotherapist at the same time.
In the far part there is a sculptural composition with a scene of death (Jean-Baptiste Pigalle).
Treasury. Once a year, on Good Friday, you can see the main Christian shrines: the crown of thorns, the holy nail and a sliver from the cross on which Jesus Christ was crucified.
The treasury also contains the clothes of Saint Louis and fragments of his relics (jaw and rib).
After passing 400 steps on a spiral staircase, you will find yourself on an observation deck with a magnificent panoramic view of Paris.
Dungeons. The tour earlier could have been continued in the ancient crypt dungeon). You could see what the Gallo-Roman fortifications under the porch looked like and how the heating system of the temple was arranged. But a fire, deliberate arson…
Visiting rules. Women are allowed to visit without a head covering (optional, but not required). 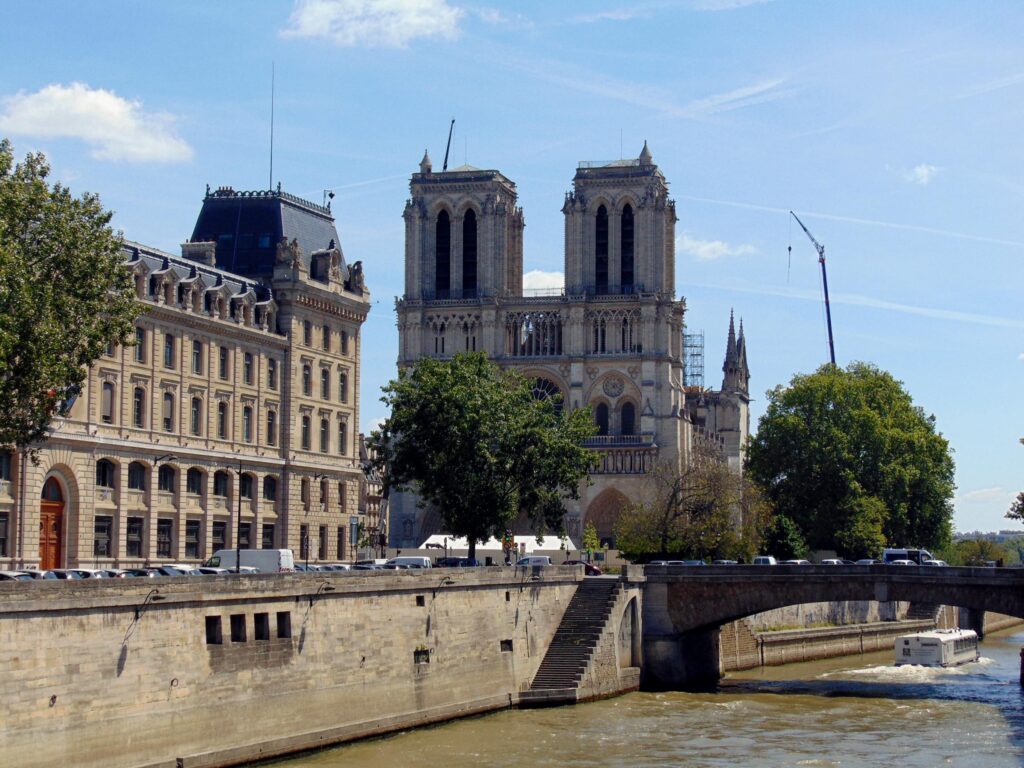 How to get there by yourself. Notre Dame Cathedral is located at the Cité metro station. Exit the subway and turn right. In a few meters you will be on la Cite street. Turn right again and move forward to the Marche Neuf embankment. Turn left and you will see Notre Dame Cathedral, or “Notre Dame de Paris” directly in front of you.

How to visit with private guide