Lisieux is a commune in the Calvados department in the Normandy region of northwestern France. It is the capital of the Pays d’Auge region, which is characterized by valleys and fenced farmlands.
The name of the city comes from the Latin: Noviomagus Lexoviorum. The city was originally known in Celtic as Novio Magos (“New Field”, “New Market”), which was romanized as Noviomagus. However, due to the large number of cities with the same name, it was necessary to indicate where this city is located. The local French demon name Lexoviens is also derived from Latin. 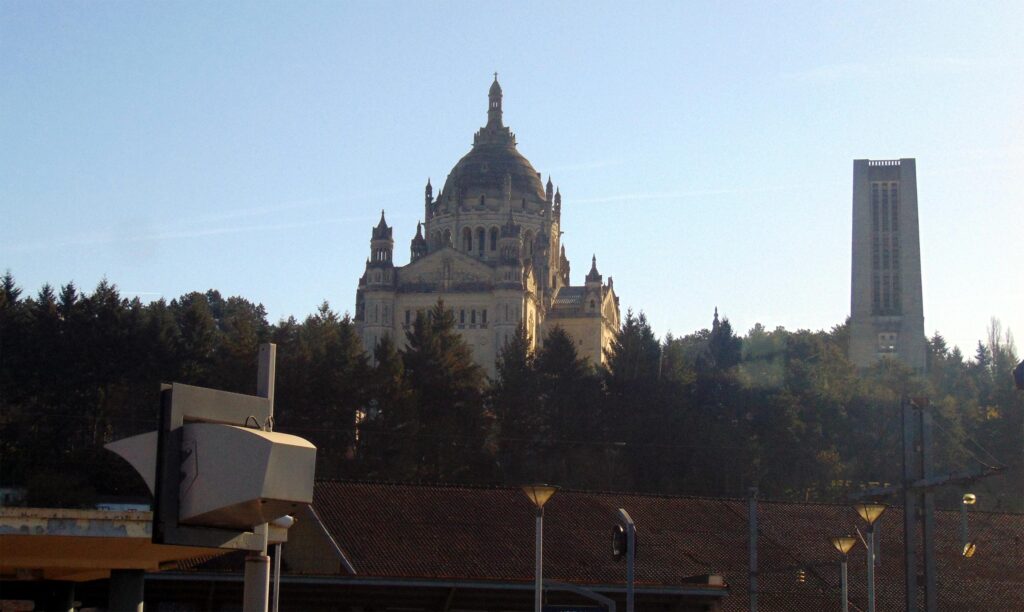 Antiquity. Lisieux was the capital of the Leks. In his Commentary on the Gallic War, Caesar mentions the Gallic oppidum, a term for Celtic hilltop cities. The oppidum was discovered at a site called Le Castellier, located 3 kilometers (1.9 miles) southwest of the city. However, the Gallo-Roman city was actually located where Lisieux is today.

Middle Ages. The city was an important center of power in the Middle Ages. The Bishopric of Lisieux controlled most of the Pays d’Auge by the 12th century. It is believed that King Henry II and Eleanor of Aquitaine were married in Lisieux in 1152, and the city remained powerful for several centuries thereafter until, in the 14th century, the triple disasters of plague, war and subsequent famine devastated Lisieux and reduced its influence. Joan of Arc’s chief judge, Pierre Cauchon, became Bishop of Lisieux after her death and is buried in the Lady Chapel of the cathedral.

The Chronicle of the events.
4th century: presence of the Germanic Laetians, auxiliaries of the Roman army, who settled in Lisieux with their families. Their graves have been discovered in the Michelet necropolis, some of which contain artifacts typical of northern Germany.
1432: Pierre Cauchon, chief judge during the trial of Joan of Arc at Rouen, became Bishop of Lisieux. He ordered the construction of the chapel of the cathedral, in which he is now buried.
1590: During the Eighth War of Religion, Henry IV had to fight to regain his kingdom. When he arrived at Lisieux, he took the city without force, after the garrison had left the city.
1897: Sister Teresa of the Child Jesus of the Holy Face died in the Carmelite convent at Lisieux. In 1925, she will be canonized as “St. Thérèse of Lisieux.”
1907: First helicopter flight, piloted by Paul Cornu.
1937: Monsieur Eugenio Pacelli, papal legate and future Pope Pius XII, visited Lisieux.

The Second World War.
June 6/7, 1944. Allied bombing killed 800 people and destroyed two-thirds of the city.
23 August 1944: Liberation by Allied forces.
1960: Lisieux merges with the commune of Saint-Jacques.
2 June 1980: Pope Jean-Paul II visited Lisieux.
Where is it, how to get there.
Lisieux is located at the confluence of the Touques River and many of its tributaries: the Orbike, Sirje and Grandein rivers (see map).
The city is located in the heart of the Pays d’Auge region, of which it is the capital. Thus, Lisieux is surrounded by typical Normandy enclosed farmland where livestock (mostly dairy cows) is raised and the cider-apple (from which cider and calvados are made, not to mention pommo) is grown.

The main sights of Lisieux.
During World War II, about 60 percent of the city was destroyed in 1944, so few monuments remain.
– Sainte-Thérèse de Lisieux Basilica
The Basilica of Saint-Thérèse de Lisieux was built in honor of Saint Therese de Lisieux, who was beatified in 1923 and canonized in 1925. It was built for the pilgrims who increasingly came to venerate the new saint in the city where she lived and died.
– Saint-Germain-de-Livet Castle (Château de Saint-Germain-de-Livet)
As the name suggests, the castle is located in the commune of Saint-Germain-de-Livet. It is located opposite the 19th century village church. The castle has belonged to the city of Lisieux since 1958, when it was donated by the Riesener family.
From an architectural point of view, the Chateau consists of a half-timbered estate from the 15th century and a glazed brick-and-stone Pre-d’Auge building from the late 16th century. It combines elements of the Middle Ages and the Renaissance and is surrounded by a moat and a peacock garden.
– Cathedral.
The Cathedral of Lisieux (Cathédrale Saint-Pierre) is a rare monument that survived the Allied bombing in 1944. Although the cathedral has been in existence since the 6th century, today’s church must have been built between 1160 and 1230 by Bishop Arnoul. From the very beginning, the architect designed quadrilateral ribbed vaults and flying buttresses, making it one of the first Gothic buildings in Normandy. The nave is rather austere and inspired by the gothic style of the Île-de-France, while the most recent parts of the building were built in the 18th century (the chevet, lantern tower and west facade) in the Norman style. It is erroneously stated that Henry Plantagenet, Count of Anjou, Duke of Normandy and future King of England, married Eleanor of Aquitaine in the cathedral in 1152; they were married in Poitiers Cathedral. Involved in the trial of Joan of Arc, Pierre Cauchon was appointed Bishop of Lisieux in 1432 and buried there.

The Practical travel information.
The town is located at the crossroads between Lower and Upper Normandy, on the road from Paris to the resorts of Deauville-Trouville or to the city of Caen.
Guided tours: