The museum is located on the left bank of the Seine in the former Gare D’Orsay railway station, built between 1898 and 1900. The museum displays works of French art from 1848-1914, including painting, sculpture, furniture and photography. It houses the largest collection of Impressionist and Post-Impressionist masterpieces in the world. Many of these works were formerly in the Jeu de Paume National Gallery before the Musée d’Orsay opened in 1986. Now it is one of the largest art museums in Europe and the world, which is in great demand among tourists in Paris.
The building was originally a railway station, Gare D’Orsay, built for the French railway company “Chemin de Fer de Paris à Orléans” (railway from Paris to Orléans). The building combined a beautiful Beaux-Arts aesthetic with cutting-edge technology, including elevators and escalators, luggage ramps and electrified tracks. It was the terminus of the railways of southwestern France until 1939. Given the modernity of the building, the debut of the station was planned to coincide with the Paris exhibition of 1900 “Universelle”. This world expo was held to highlight the innovations and inventions that transformed the world at the turn of the century. After such an important event, Gare D’Orsay served as a terminal for railways from South West France to Paris for almost four decades. By 1939, the station’s short platforms became unsuitable for longer trains. Therefore, after 1939, the building was used for suburban communications, and part of it became a postal center during World War II. In the war and post-war period, the building was also used for other purposes: for shooting several films, as a shelter, theater, hotel. In 1970, permission was given to demolish the station, but Jacques Duhamel, Minister of Culture, abandoned plans to build a new hotel in its place. The station was listed as a Historic Monument in 1978. The proposal to turn the station into a museum came from the directorate of museums in France. The idea was to build a museum that bridged the gap between the Louvre and the National Museum of Modern Art at the Georges Pompidou Centre. The plan was adopted by Georges Pompidou in 1974. In 1978, a competition was organized to design the new museum. ACT Architecture, a team of three young architects (Pierre Colboc, Renaud Bardon and Jean-Paul Philippon), was awarded a contract that included the creation of 20,000 square meters of floor space over four floors. In 1981, the Italian architect Gae Aulenti developed the interior design, including the interior layout, decoration, furniture and fittings of the museum. Finally, in July 1986, the museum was ready to receive its exhibits. It took 6 months to install about 2000 paintings, 600 sculptures and other works. The museum was officially opened in December 1986 by the president of the period, François Mitterrand. Since its grand debut, the museum has built an acclaimed art collection that spans painting, sculpture, photography and the decorative arts. The exhibition space is creatively distributed around the unusual building, which consists of several levels. 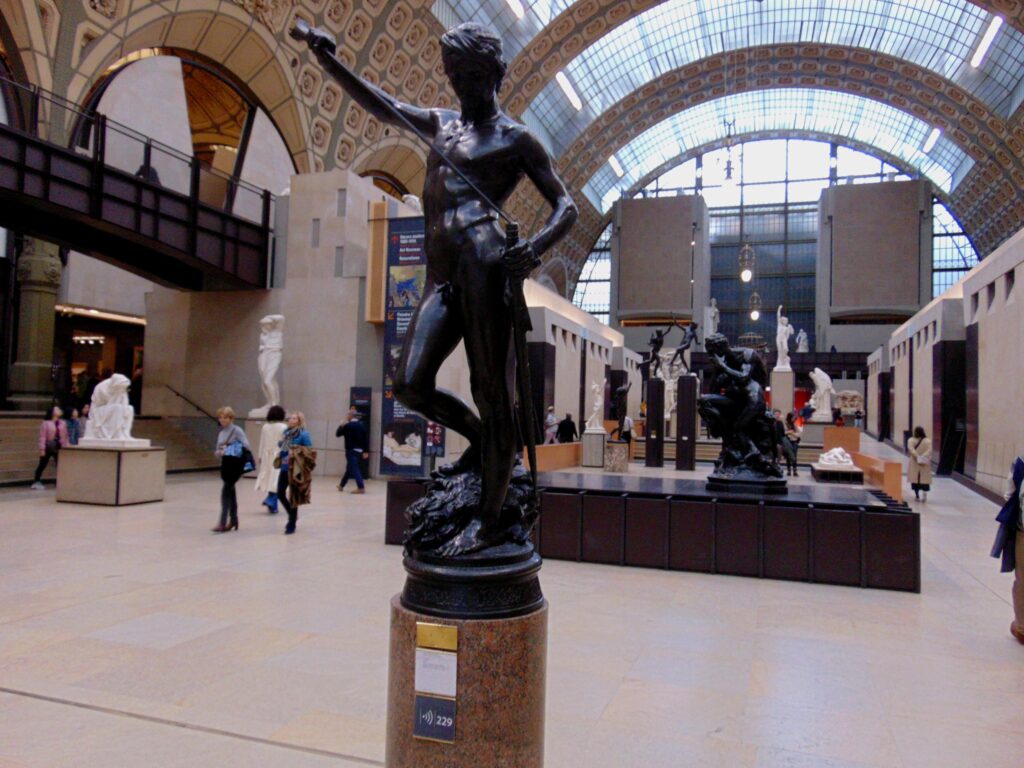 In total, the museum’s collection includes more than 4 thousand works of art. Painting, graphics, sculpture. The most valuable exhibits:.
Paintings by Delacroix, Ingres, Moreau, Renoir, Monet, Toulouse-Lautrec, Van Gogh. There are also works by Russian masters – paintings by Serov.
Furniture in the Art Nouveau style, including chairs and a cabinet from Talashkino (the estate of Princess E. Tenisheva in the Smolensk province).
The museum rotates exhibits every 2-3 years.

0 level. Ground floor. Permanent and temporary exhibition for 2019.
Artwork created between 1850 and 1880 can be found on the basement floor. Most of the museum’s sculpture collection is displayed in the central hall, while pre-impressionist works, including paintings by Gustave Courbet, and interior items are displayed in adjacent galleries. The paintings on this floor are from the pre-Impressionist era and exhibit works by Delacroix, Bari, Degas, as well as some works by Monet. The level consists of two main parts: the central avenue of sculptures and the outer rooms containing the paintings (see ground floor plan). The sculptures form two long rows, as if reminiscent of railway tracks, and are among the finest works from the middle of the 19th century.
The largest part of the museum building was the central alley, in which sculptures are exhibited. The glass vault provides uniform illumination of the hall. The huge size of the nave itself makes this exposition even more monumental. Here are the famous sculptures: James Pradier. “Saffo” (James Pradier “Sappho”); Ernest Barrias, “The Crocodile Hunters” (Louis Ernest Barrias, “Les Nubiens ou Les Chasseurs d’alligators”); the monumental composition of Auguste Rodin “The Gates of Hell” (Auguste Rodin, “La Porte de l’Enfer”) Jules Cavelier, “Penelope” (Jules Cavelier “Pénélope”), as well as the creations of other masters of this genre, such as: Alexander Falguiere ( Alexandre Falguière), Jean-Baptiste Carpeaux, David d’Angers, Auguste Clésinger. Halls adjoining the central alley display works of painting and arts and crafts.
On the ground floor there are also: the Symbolist Gallery, the “Opera Garnier” section and the hall of temporary exhibitions. For 2018-2019, the exhibition “Picasso. Blue and pink.”

On the fifth level there is also a summer terrace and the Campana café.
The Museum has an observation deck. During the visit, you can see the surroundings in the heart of the city, the Louvre and the Seine.