Guide to the South of France. Cote d’Azur, Alpes Provence. Sights, what to see in one day, guided tours from Nice and Cannes, useful tips..

Marseille is a prefecture of the Bouches-du-Rhône department and the Provence-Alpes-Côte d’Azur region in France. It is located on the Mediterranean Sea near the mouth of the Rhone River. Marseille is the second largest city in France with an area of 241 km2 (93 sq mi) and a population of 870,018 in 2016. Its 3,174 km2 (1,225 sq mi) metropolitan area is the third largest in France after Paris and Lyon, with a population of 1,760,653 as of 2017, or 3,100,329 (2019) under the broader Eurostat definition of a metropolitan area. Its inhabitants are called Marseilles. 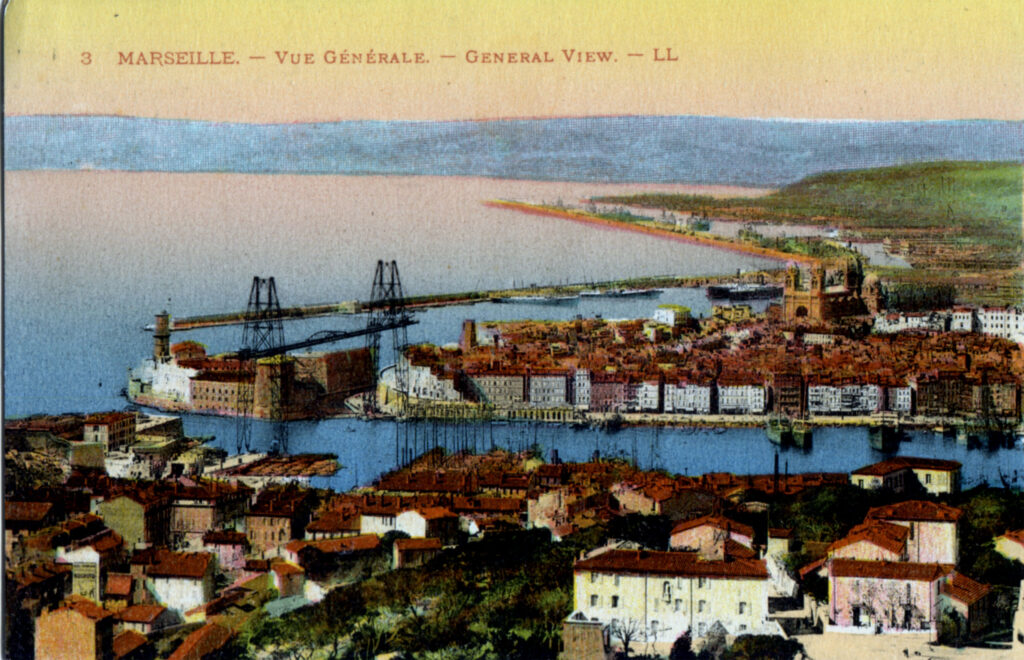 One of the oldest cities in Europe, founded around 600 BC. and known to the ancient Greeks as Massalia and to the Romans as Massilia. Marseille has been a trading port since ancient times. In particular, it experienced a significant commercial boom during the colonial period and especially in the 19th century, becoming a thriving industrial and commercial city. At present, the Old Port is still located in the very center of the city, where soap production, its famous Marseille factory, began about 6 centuries ago. Overlooking the port is the Basilica of Notre-Dame-de-la-Garde or “Bonn-Mer” for the people of Marseille, a Romano-Byzantine church and a symbol of the city. Inherited from the past, the Grand Maritime Port of Marseille (GPMM) and the maritime economy are the main poles of regional and national activity, and Marseille remains the first French port, the second Mediterranean port and the fifth port in Europe. Marseille’s openness to the Mediterranean has made it a cosmopolitan city from the start, marked by cultural and economic exchanges with Southern Europe, the Middle East, North Africa and Asia. In Europe, the city has the third largest Jewish community after London and Paris.
In the 1990s, the Euroméditerranée project for economic development and urban renewal was launched. In the 2000s and 2010, new infrastructure and renovations were carried out: the tram, the reconstruction of the Hôtel-Dieu into a luxury hotel, Le Silo, the expansion of the Velodrome stadium, the CMA CGM Tower and other waterfront memorial sites and museums such as the Museum of European and Mediterranean Civilizations (MuCM). As a result, Marseille now has the most museums in France after Paris. The city was named European Capital of Culture in 2013 and European Capital of Sports in 2017. In addition, Marseille hosted matches of the 1998 World Cup and Euro 2016. It is also home to several higher education institutions in the region, including the University of Aix-Marseille.
Short story. Marseille was founded as the Greek colony of Massalia around 600 BC. and was settled by Greek settlers from Fokai (modern Foca, Turkey). It became an outstanding Greek polis in the Hellenized region of southern Gaul. The city-state sided with the Roman Republic against Carthage during the Second Punic War (218–201 BC), maintaining its independence and trading empire throughout the western Mediterranean even as Rome expanded into Western Europe and North Africa . However, the city lost its independence after the Roman siege of Massilia in 49 BC, during Caesar’s civil war, in which Massalia sided with an exiled faction at war with Julius Caesar. Later, the Gallo-Roman culture arose. Marseille continued to flourish as a Gallo-Roman city, becoming an early center of Christianity during the Western Roman Empire. The city retained its position as a major maritime trade center even after its capture by the Visigoths in the 5th century AD, although the city fell into disrepair after being sacked in 739 AD by the forces of Charles Martel. It became part of the county of Provence in the 10th century, although its renewed prosperity was limited by the Black Death of the 14th century and the sack of the city by the Crown of Aragon in 1423. The city’s fortunes were restored thanks to the ambitious building projects of René of Anjou, Count of Provence, who strengthened the city’s fortifications in the mid-15th century. During the 16th century, the city hosted a navy with the combined forces of the Franco-Ottoman alliance that threatened the ports and navies of Genoa and the Holy Roman Empire. Marseille lost a significant part of its population during the Great Plague of Marseille in 1720, but the population recovered by the middle of the century.

The French revolution. In 1792, the city became the center of the French Revolution, and although the French national anthem was born in Strasbourg, it was first sung in Paris by volunteers from Marseille, hence the name the crowd gave it: Marseillaise. The Industrial Revolution and the creation of the French Empire in the 19th century allowed for the expansion of the city.

The Second World War. The city was occupied by the German Wehrmacht in November 1942 and was subsequently heavily damaged during World War II.
Emigration. The city became a major center for immigrants from former French colonies such as French Algiers.

(including shopping areas) are located in the 1st, 2nd, 6th and 7th districts. These include:
– Old Port (Vieux-Port), the main harbor and marina of the city. It is guarded by two massive forts (Fort Saint-Nicolas and Fort Saint-Jean) and is one of the locations of the best restaurants in the city. Dozens of cafes lined the waterfront. The Belgian waterfront at the end of the harbor is the site of a daily fish market. Much of the north embankment was restored by the architect Fernand Pouillon after its destruction by the Nazis in 1943.
– Hotel de Ville (City Hall), a 17th century Baroque building.
– Center Bourse shopping center and the surrounding area of Rue Saint-Ferreol (St Ferreol), including Rue de Rome (Rome) and Rue Paradis (Paradis), the main shopping area in the center of Marseille.
– Porte d’Aix (Porte d’Aix), a triumphal arch dedicated to the victories of the French in the Spanish expedition.
– Hôtel-Dieu, a former hospital in Le Panier, was converted into an InterContinental hotel in 2013.
– La Vieille Charité in Le Panier, an architecturally significant building designed by the Puget brothers. The central baroque chapel is located in the courtyard with arcaded galleries. Originally built as an almshouse, it now houses an archaeological museum and a gallery of African and Asian art, as well as bookstores and cafes. It is also home to the Marseille International Center for Poetry.
– Cathedral of Sainte-Marie-Majeure or La Major, founded in the 4th century, expanded in the 11th century and completely rebuilt in the second half of the 19th century by the architects Léon Vaudoyer and Henri-Jacques Esperandier (Henri-Jacques Espérandieu). Today’s cathedral is a gigantic building in the Romano-Byzantine style. The Romanesque transept, choir and altar are the only survivors of the older medieval cathedral, saved from complete destruction only as a result of the public protests of the time.
– The parish church of Saint-Laurent (Saint-Laurent) of the XII century and the adjoining chapel of St. Catherine of the XVII century on the embankment next to the cathedral.
– Saint-Victor Abbey, one of the oldest Christian places of worship in Europe. Its 5th-century crypt and catacombs occupy the site of a Hellenic burial ground that was later used for Christian martyrs and has been venerated ever since. Continuing the medieval tradition, every year at the Candlemas the Black Madonna is carried from the crypt in procession along the Rue Sainte for the blessing of the archbishop, followed by Mass and the distribution of “navettes” and green votive candles.
Museums of Marseille
– Museum of European and Mediterranean Civilizations (MuCEM) and Villa Mediterranee were opened in 2013. MuCEM is dedicated to the history and culture of European and Mediterranean civilizations. The nearby Villa Méditerranée, an international center for cultural and artistic exchange, is partly built underwater. The site is linked by footbridges to Fort Saint-Jean and Panier.
– Musée Regards de Provence, opened in 2013, is located between the Cathedral of Notre Dame de la Major and Fort Saint-Jean. It occupies a converted port building built in 1945 to monitor and control potential maritime health hazards, in particular epidemics. It now houses a permanent collection of historical art from Provence, as well as temporary exhibitions.
– Musée du Vieux Marseille, housed in the 16th century Maison Diamantée, tells the daily life of Marseille since the 18th century.
– The Romen Docks Museum preserves on site the remains of Roman commercial warehouses and has a small collection of items dating from the Greek period to the Middle Ages that were found on site or salvaged from shipwrecks.
– The Museum of the History of Marseille (Musée d’Histoire de Marseille), dedicated to the history of the city, is located on the central exchange. It contains the remains of Marseille’s Greek and Roman history, as well as the best preserved 6th-century boat hull in the world. The ancient remains of the Hellenic port are exhibited in the nearby archaeological garden Jardin des Vestiges.
– Musée Cantini, contemporary art museum near the Palais de Justice. It contains works of art associated with Marseille, as well as several works by Picasso.
– Grobet-Labadier, located opposite the Palais Longchamp, houses a unique collection of European art and ancient musical instruments.
– The 19th century Longchamp Palace, designed by Esperandieu, is located in Longchamp Park. This grand Italian building with columns rises behind a huge monumental fountain with cascading waterfalls. The Jeux d’eau marks and masks the entrance to the Canal de Provence in Marseille. In two of its wings are the Museum of Fine Arts of Marseille and the Museum of Natural History (Muséum d’histoire naturelle de Marseille).
– The Château Borély castle is located in the Borély park, off the coast of the Gulf of Marseille, where the botanical garden of E.M. Heckel. The Museum of Decorative Arts, Fashion and Ceramics opened in the renovated castle in June 2013.
– Musée d’Art Contemporain de Marseille (MAC), a contemporary art museum, opened in 1994. It focuses on American and European art from the 1960s to the present day.
– Musée du Terroir Marseillais in Château-Gombert, dedicated to Provencal crafts and traditions.

Photo gallery of the past, the collection of the  “Taxi Drivers Union in Paris & Nice”. 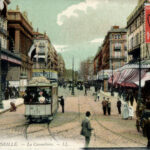 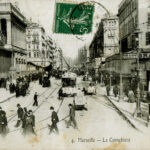 How to get from Paris. TGV, Charles de Gaulle Airport, Orly, Beauvais.

– Nearest airport, transfer and taxi.
— Local railway station.
– Private guided tours to Provence from Nice and Cannes, from beach resorts for one day or more