Louvre Museum Paris, Travel Guide in English. The Map of the location of the collections, where everything is located, the old and modern photos. 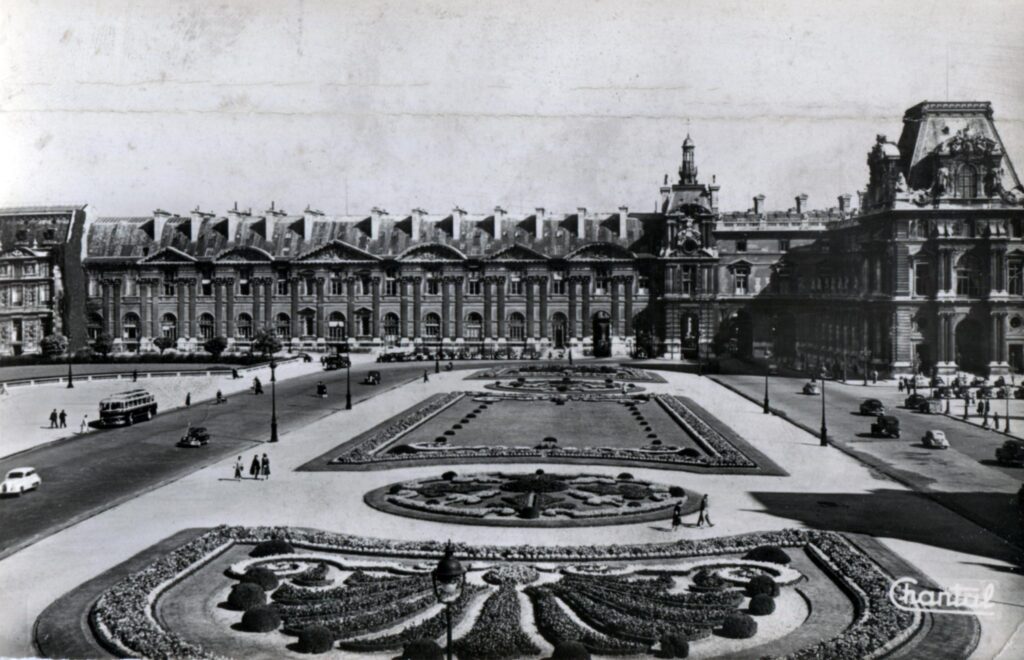 It so happened historically that a huge number of different styles have always been mixed in the architecture of the Louvre. It began with the fact that in the XII century, King Philip Augustus built a real fortress on the western border of Paris (imagine where the city was then located) to protect against enemies. It also kept the treasures of the royal treasury and archives. Later, under King Charles V, the fortress turns into a royal palace.
During the Renaissance, architects rebuild the ensemble to the taste of two kings at once – Francis I and Henry IV. For this purpose, the main part of the fortress wall was destroyed and a huge gallery was built connecting the Louvre with the then existing Tuileries Palace. At the beginning of the 17th century, King Henry IV, an art lover, invited artists to live and work in the palace. They are allocated spacious premises for workshops, housing and the status of court painters. The Louvre turns into a large art gallery.
– Louis XIV moves the royal court to Versailles, and artists, sculptors and architects live in the Louvre: Jean Honore Fragonard, Jean Chardin, Francois Boucher, Jean-Louis David, Guillaume Coust. Deprived of the status of a royal residence and becoming a place of residence for the bohemia, the Louvre fell into a state of decline so that they even wanted to demolish it.
– The French Revolution did not cause damage to the buildings, and after it the Louvre turned into the “Central Museum of Art”.
– Napoleon III realized the dream of Henry IV and added to the Louvre the Richelieu Wing, which became a symmetrical reflection of the Hauts-Borde-de-l’Eau gallery.
– The Parisian Commune and its Communards, as they “should” have, burned down the Tuileries Palace and, at the same time, an essential part of the Louvre.

Louvre today. The collection includes over 350,000 works of art and nearly 1,600 museum staff, including security and caretakers.

Louvre museum entrance and a long queue of visitors

Official information: The Louvre (French Musée du Louvre) is one of the largest and most popular museums in the world (9,720,260 visitors in 2012, the third in the world in terms of area: 160,106 square meters, of which 58,470 are expositions). The museum is located in the center of Paris, on the right bank of the Seine, on Rue Rivoli, in the 1st arrondissement of the capital. After a temporary closure during the pandemic, the number of visitors is steadily moving towards what it was before 2020. Visiting rules change depending on the situation (wearing masks, sanitary pass, PCR tests, etc.)
The building is an old royal palace (Palais du Louvre). The equestrian statue of Louis XIV marks the starting point of the so-called historical axis of Paris, but the palace is not aligned with it.

The Louvre is one of the oldest museums with a rich history of collecting art and historical relics in France, from the time of the Capetian dynasty to the present day.
Everything was collected in the Louvre, this museum can be called universal. His collections cover vast geographic and temporal spaces: from Western Europe to Iran through Greece, Egypt and the Middle East; from antiquity to 1848. European art of the latest period of time – from 1848 to the present day – is presented at the Musée d’Orsay and the Center Georges Pompidou, and Asian art is exhibited at the Guimet Museum. The art of Africa, America and Oceania is on display at the Quai Branly Museum.

History. Royal Palace. At the heart of the Louvre is a castle-fortress – the Great Tower of the Louvre – erected by King Philip Augustus in 1190. One of the main purposes of the castle was to watch the lower reaches of the Seine, one of the traditional routes of invasion and raids of the Viking Age. In 1317, after the transfer of the property of the Templars to the Order of Malta, the royal treasury was transferred to the Louvre. Charles V turns the castle into a royal residence. The outdated Great Tower of the Louvre was destroyed by order of Francis I in 1528, and in 1546 the transformation of the fortress into a magnificent royal residence began. These works were carried out by Pierre Lescaut and continued during the reigns of Henry II and Charles IX. Two new wings have been attached to the building. In 1594, Henry IV decides to connect the Louvre with the Tuileries Palace, built at the request of Catherine de Medici. The square courtyard of the palace was created by the architects Lemercier, and then Louis Levo during the reign of Louis XIII and Louis XIV, quadrupled the palace. The design and decoration of the palace was then led by such artists as Poussin, Romanelli and Lebrun. In 1667-1670. Architect Claude Perrault built the Louvre Colonnade on the eastern façade of the palace overlooking Louvre Square.
In 1682, work came to an abrupt halt when Louis XIV chose Versailles as the new royal residence. Since the 18th century, there has been a growing number of proposals to turn the Louvre building into a museum. The project is born in the reign of Louis XV and ends with the French Revolution. After the revolution, work in the Louvre was continued by Napoleon I. His architects Percier and Fontaine began the construction of the north wing along Rivoli Street. It was completed in 1852 under Napoleon III, and the construction of the Louvre was completed. After the fire and destruction of the Tuileries, which took place during the siege of the Paris Commune in May 1871, the Louvre acquired a modern look. In 1989, a glass pyramid was erected in the center of the Napoleonic courtyard (architect Yo Ming Pei).

The doors of the museum were first opened to the public on August 10, 1793, during the French Revolution. Under the First Empire, it was called the Napoleon Museum.
At the beginning of its existence, the Louvre replenished its funds at the expense of the royal collections collected at the time by Francis I (Italian paintings) and Louis XIV (the largest acquisition was 200 paintings by the banker Everard Jabach (fr. Everhard Jabach). At the time the museum was founded, the royal collection consisted of exactly 2500 canvases.
Gradually, the most valuable paintings of the royal collection were transferred to the museum collection. A huge number of sculptures came from the Museum of French Sculpture (musée des Monuments français) and after numerous confiscations of property during the revolution.
During the Napoleonic Wars, at the suggestion of the first director of the museum, Baron Denon, the Louvre collection was replenished with military trophies, at the same time archaeological finds from Egypt and the Middle East come to the museum. During the 19th and 20th centuries, the museum’s collection was replenished as a result of many acquisitions and gifts, among the latest – the collection of Edmund Rothschild, which the museum inherited under the will of the latter.
The exhibits ended up in the Louvre in various ways. The most famous paintings of the Louvre – “La Gioconda” by Leonardo da Vinci and “The Beautiful Gardener” by Raphael – belonged to Francis I, who acquired Leonardo’s personal collection after his death in 1519. Many canvases ended up in the Louvre as trophies of the Napoleonic army, especially after the sack of Venice in 1798 (for example, “Marriage at Cana of Galilee” by Paolo Veronese). Murillo’s “Little Beggar” was purchased by Louis XVI in 1782. Vermer’s “Lacemaker” and Dürer’s “Self-Portrait with Thistles” were purchased by the museum in 1870 and 1922, respectively. Finally, the painting “Christ on the Cross” by El Greco went to the museum as a gift, it was taken from the courthouse in Prades (Eastern Pyrenees) in 1908.
The most famous sculptures of the museum are Venus de Milo, found in 1820 and then acquired by the French ambassador from the Turkish government, and Nika of Samothrace, found in parts in 1863 on the island of Samothrace by Charles Champoiseau, an archaeologist and Vice-Consul of France in Adrianople.
The Louvre collections contain masterpieces of art from different civilizations, cultures and eras. The museum has about 300,000 exhibits, of which only 35,000 are exhibited in the halls. Many exhibits are kept in storage because they cannot be shown to visitors for more than three consecutive months for reasons of safety. 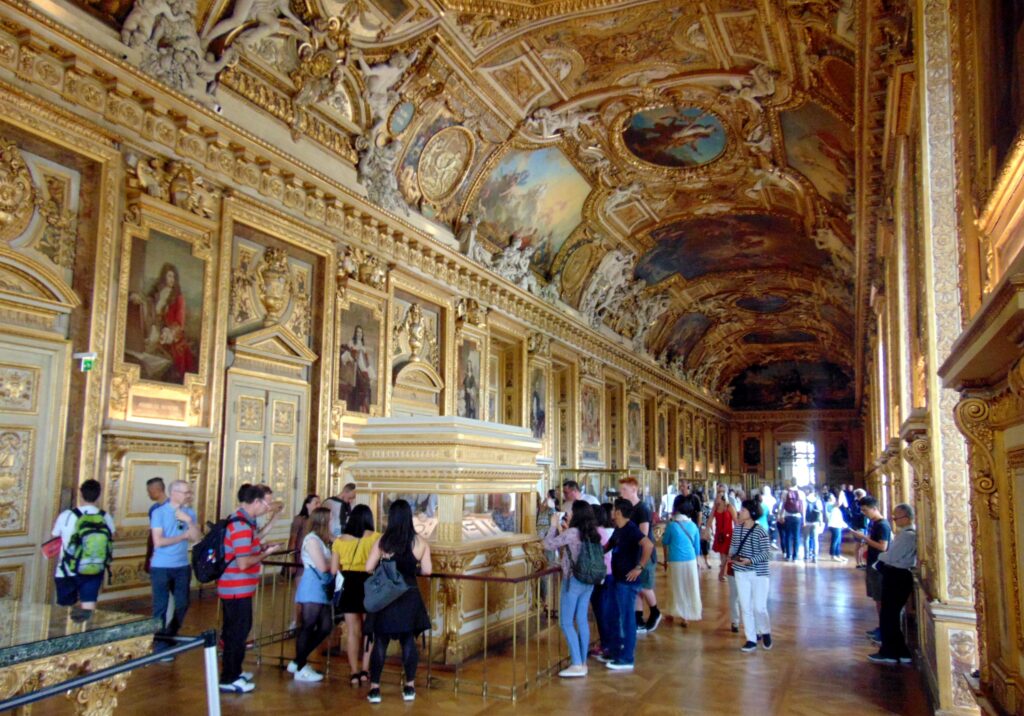 Louvre museum collection and the tourists

Mini guide to museum collection.
The collections are located in the three wings of the building: Richelieu (along Rue Rivoli), Denon (parallel to the Seine) and Sully (surrounding the square courtyard). Where is located:

— The Ancient East and the Art of Islam:
Richelieu Wing (ground and first floors) and Sully Wing. Objects of ancient art on the territory from the Bosphorus to the Persian Gulf, Mesopotamia, Persia, the Levant.