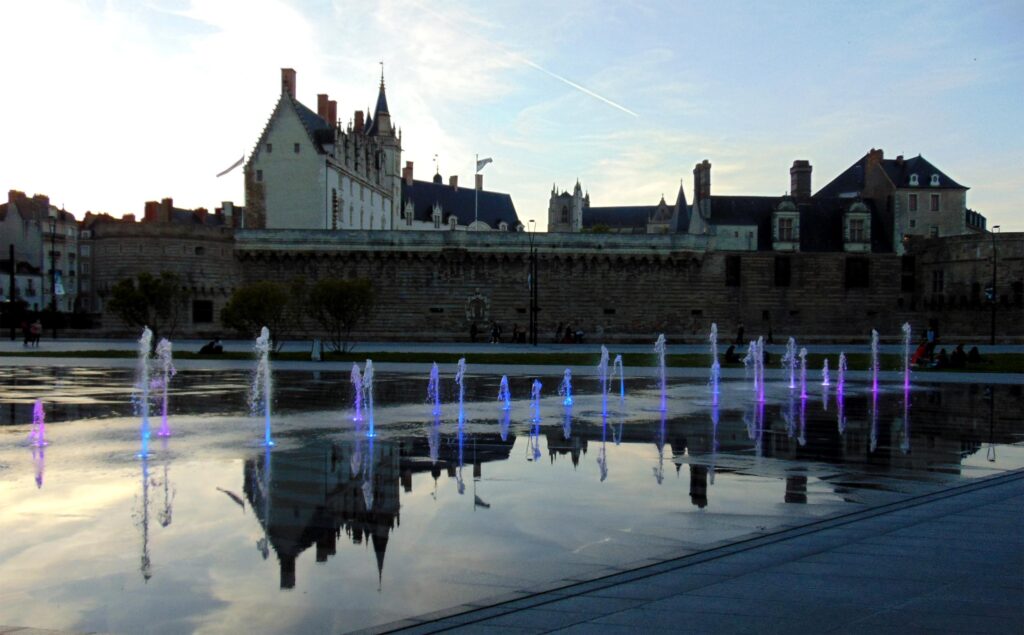 Located in the west of France, 2-3 hours by high-speed train or by a car, Nantes is the capital of the Loire-Atlantique department and the entire Pays de la Loire region. A major industrial center, known primarily for shipbuilding, Nantes is rightfully considered a city of “culture and history”. Located at the mouth of the Loire, only 50 kilometers from the outpost of Saint-Nazare (Saint-Nazaire), Nantes has occupied an important geographical and strategic position for many centuries. A fortress was built here, which exists to this day, bridges, roads, a medieval city, churches. The presence of a large island in the center of the city and sufficient depth of the river made it possible to engage in shipbuilding. The history of the city is connected with Brittany. The first settlements here arose either during or after the Stone Age. According to archaeological research, it is known that a port center was formed here, which became the capital of the Gallic tribe of Namnets.

Starting from the 5th century AD, here is the residence of the bishop and the capital of the Frankish county. Nantes becomes a fortified area in the fight against the Bretons, but in 851 AD the Breton ruler Nominoe (Nominoë) captures the city and the “Breton” history of the city begins. A large fortress with a ducal castle, a large cathedral and many architectural monuments are being built. The castle became the residence of the Breton dukes until the 15th century. Later, the Breton capital was moved to the Rhine, but Nantes still remained a major commercial and industrial city.

The Great French Revolution in the Battle of Nantes in 1793 made it the capital of the Vendée uprising. Since that time, there are still strong “communist” sentiments here and a “popular front” has been active, since after the industrialization of the city, many shipyard workers live here.

After the First World War, the city center underwent a major restructuring and even the path of the Loire through the city was changed, which can be clearly seen in the prints and photographs during a tour of the castle from special viewing platforms.

The Second World War brought some damage as a result of the bombing of the industrial strategic sites, but the old city and its main architectural landmarks remained intact. The fortress, cathedrals, old houses have been preserved.

By the end of the 20th century, Nantes began to experience deindustrialization, reclassifying into the service sector, culture, tourism and entertainment. For this purpose, France’s largest cultural and entertainment center “Machines of the Island of Nantes” was built on the island on the basis of the shipyard according to the drawings and ideas of the writer Jules Verne and designer Leonardo da Vinci. French national response to Hollywood Disneyland. Techno entertainment.

Nantes Travel Guide and the main attractions.
Nantes is divided into several districts, each of which, in terms of tourism, has its main attractions. The route and sequence of visits are chosen by everyone, depending on interests and priorities. Therefore, below we present the main areas of Nantes and local attractions that are worth seeing with a guide or on your own.

Quarter “Station” (Gare). Here is the railway station, the water channel Saint-Felix, the Museum of Fine Arts, the Garden with plants (Jardin des Plantes) and the unique old place of the cake factory (“Le Lieu Unique”).

Bouffay area. This is the fortress “Castle of the Duke of Brittany” with museums located in it, beautiful old buildings, symbols of the city, the Cathedral of Saints Peter and Paul (“Cathedrale Saint-Pierre et Paul”), numerous shops, cafes, restaurants, expensive hotels. There is even a Galeries Lafayette. Old town and tourist center. Favorite vacation spot for residents and guests. 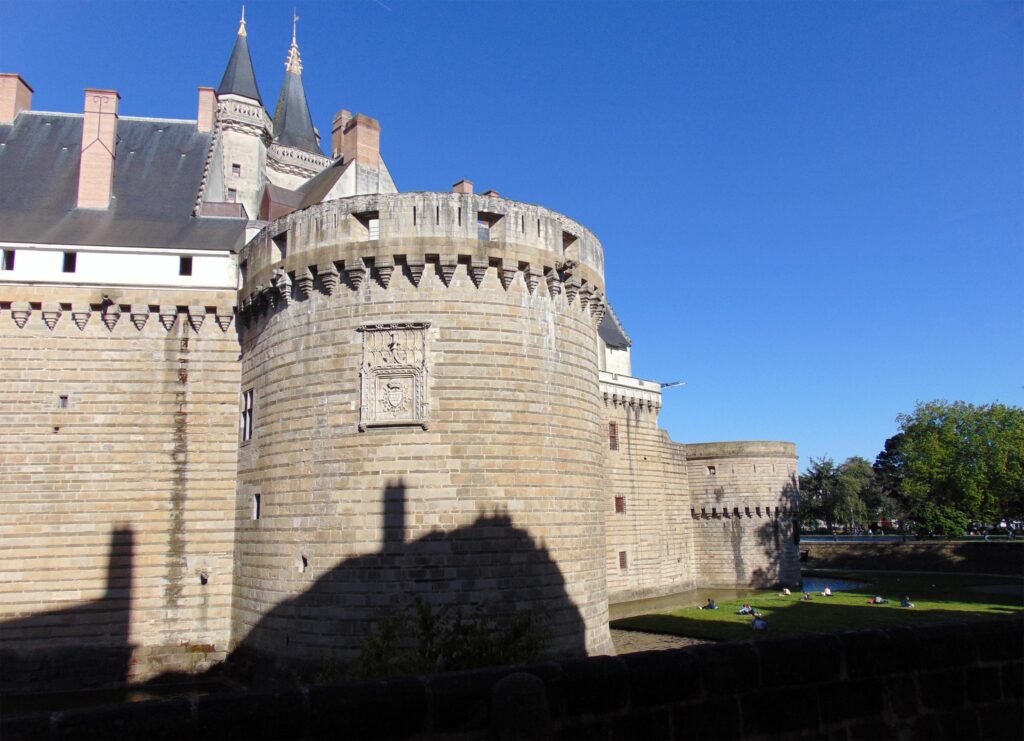 Military history buffs. Here are monuments to King Louis XVI and the heroes of the First World War, the Walk of Fame and memorials. During the Second World War, the Gestapo was located here on Marshal Foch Square.

Quarter Graslin. Behind the tram line, Graslin is a smooth extension of the historic center of the city, along the former arm of the Loire. In addition to beautiful old buildings, there is the Graslin Opera, the Museum of Natural History, the Museum of Printing and the Church of Our Lady de-bon-port. A popular place for tourists is “Passage Pommeraye” and many boutiques.

Feydeau Quarter. A former island in the heart of Nantes overlooking the Loire, contains ancient buildings, parks, a swimming pool and shops. This is a whole area with 18th century architecture. Most of the buildings belonged to ship owners. The houses are very beautiful, with carved masks and wrought iron balconies.
Tourist and entertainment techno-center “Ponton Belem”. From this place, the former bed of the Loire, you can turn left, cross the Pont Anne of Brittany and get to the famous “Isle of Nantes” – the techno park of entertainment, “Machines”. You can continue along the waterfront and visit the museums and other places of interest in the Graslyn and Chantenay areas. Here the embankment has an interesting shape in the form of a long pontoon and serves as a place for festivities for local residents and guests of the city. Pleasure excursion boats also leave from here. Periodically, festivals and holidays are held at Ponton Belem, old and ancient ships, including medieval ones under sail, moor here. At the moment, the photo shows a historic vessel, typical of the First World War, judging by the paddle wheel in the center of the ship. On the left is the floating restaurant “O Deck” near the Amusement Park of the Isle of Nantes.

Island of Nantes. The former area of the shipyard, the piers and the industrial zone, turned into a huge techno-amusement and recreation park, through the streets of which the giant Big Elephant (“Grand Éléphant”) from the stories of Jules Verne walks. The Machines of the Isle of Nantes is now the main competitor of the Disneyland amusement park near Paris. 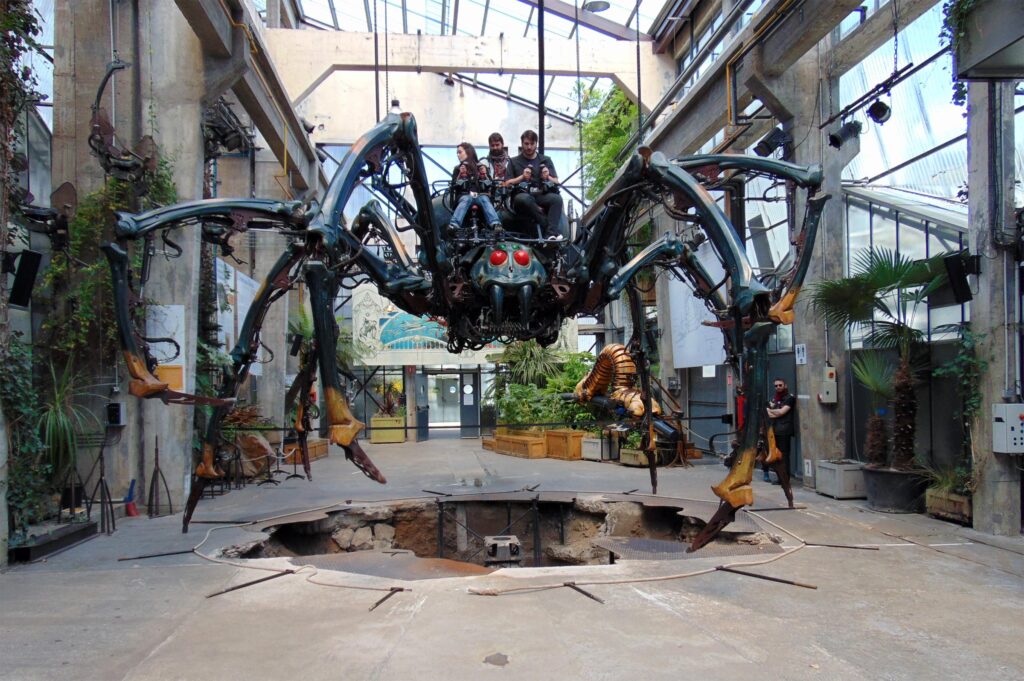 Giant Spider crawled out of a hole (Machines Island Park)

Talensac quarter. Going north from the city center you find yourself in a beautiful quarter with Art Nouveau elements. A large tower-skyscraper “Tour Bretagne” surrounded by old houses. The northeastern end of this place passes into the Erdre, a tributary of the Loire and into the water channel, from where river excursions in the surroundings begin. Further along the river Erdre is the wonderful “Ile de Versailles” with a Japanese garden. On the island you can rent a boat and take a boat trip along the Versailles embankment.

Chantenay area. Far from the center of Nantes, best accessed by taxi or guided car if Nantes is included in the Loire Valley Tours. This elevated position offers a magnificent panoramic view of the city and the island of Nantes. On the hill is the Jules Verne Museum, and on the embankment near the port is the Naval Museum and the real warship of the French Navy Maille Breze. Behind the seaport, from where sea excursions begin, a long gallery of local vegetation, various types of plants, has been built. A great place for scouts and young naturalists.

Outskirts of Nantes. Trentemoult: the small fishing villages. You can get there by river taxi along the Loire River from the maritime station or by car.

Evening Nantes
In the evening, Nantes becomes even more beautiful with colorful advertising lights and lights. Near the castle of the Dukes of Brittany there is a square with fountains – a favorite place for evening walks of tourists and local youth. Water, lights, trees.

Rue des Carmes: it is this narrow street in the old district of Nantes that becomes the main place for evening gatherings in cafes and restaurants. Karma Street is the center of the city’s nightlife. The combination of antiquity and interior in a modern style. French cuisine, Mediterranean cuisine and seafood restaurants. Drinks and bistros. Stylish design. Asian restaurants and Italian pizza, food for every taste. French wines in a large assortment, local beer, branded cocktails. And lots and lots of music. Illumination and illumination.

Practical tourist information. How to get there, the best hotels.
Most tourists arrive here by high-speed train or by car. The city has excellent comfortable expensive hotels, as well as excellent apartments for lovers of antiquity.