Château de Langeais is an amazing and beautiful Gothic castle built in the 15th century in France, built on a promontory formed by a small valley of the Roumer River at the entrance to the Loire Valley (Indre-et-Loire department). Founded in 992 by Fulk Nerra, Count of Anjou, the castle was soon attacked by Odo I, Count of Blois. After an unsuccessful attack, the now ruined stone fortress was built; it is one of the earliest dated stone specimens. Between 994 and 996 the castle was subjected to two more unsuccessful sieges. During the conflict between the counts of Anjou and Blois, the castle changed hands several times, and in 1038 Fulk again captured the castle.
After it was destroyed during the Hundred Years’ War, King Louis XI (1461–1483) rebuilt Château de Langeais into what is today one of the most famous examples of late medieval architecture. It is especially famous for its monumental and ornate fireplaces. Restored at the end of the 19th century, the Langeai castle came under the control of the French Institute, which today owns this place. It is listed as a historical monument by the French Ministry of Culture and is open to the public. 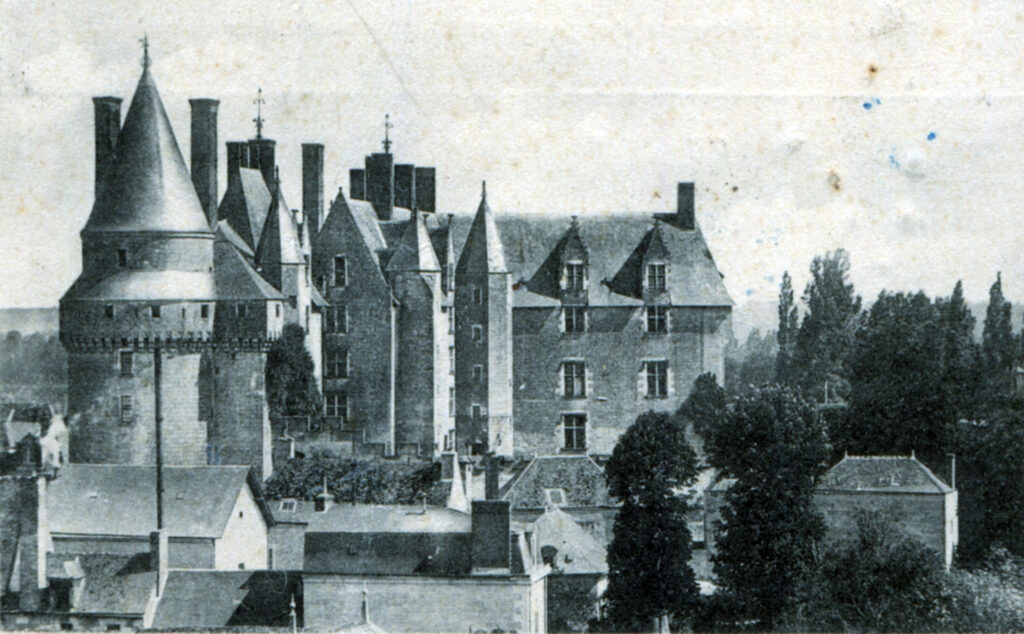 History. In the 10th century, a castle appeared, which is considered to be the second earliest known, the earliest of which was the castle of Doué-la-Fontaine (Doué-la-Fontaine), built by the Count of Blois around 900. The Counts of Anjou and Blois had frontier territories and powerful lords were rivals; as a result, the border area contains some of the earliest known castles. When it was founded in 992 by Fulk Nerra, Count of Anjou, the castle of Langeais was made of wood and had the shape of a “bailey hill”. A contemporary chronicler noted that it was built because “(Fulk) had no resting place between Bourgueil and Amboise along the river Loire”. He also had the advantage of being 24 km from Tours, a city under the control of Odo I, Count of Blois. Although the land belonged to Fulk, the territory was under Odo’s control. When news of the fortification reached Odo, he sent troops to destroy it. The attack was unsuccessful and Fulk fortified the area by building a stone fortress, which today stands in ruins. To distract Odo from the building work, which was completed by 994, Fulk periodically raided his lands. It has been suggested that the shallow foundations and thin walls of the fortress, 2 m thick and averaging 1.5 m, show that it was hastily built. Although he failed in 992, Odo tried again to take the castle two years later. This time he summoned his Normans, Flemings and Aquitanians, and the siege of the Château de Langeais began in the spring of 994. Fulk himself led the garrison and sent a message to Hugh Capet, king of the Franks, asking for help; and, although Hugh was ill, he promised reinforcements. Meanwhile, Odo’s army grew as his allies continued to push towards him. The siege continued throughout the summer, and Fulk began negotiations with Odo. Reacher, a contemporary chronicler favorable to Odo, claimed that Fulk agreed to surrender, but later refused, stating that the agreement was not binding, although it is not clear if this was the case. However, the Capetian forces arrived before Fulk was forced to surrender. Faced with the royal army, Odo agreed to leave Fulk alone.
After the siege ended and Odo withdrew, Fulk had to deal with the fighting on the western frontier of his lands. Despite Odo’s arrangement with Hugh, the Count of Blois used Fulk’s divided attention to station troops at Châteaudun, from where he could move to capture Langeais if the opportunity presented itself. Odo laid siege to Langeai Castle in 995. The siege continued the following year, but in March 996 Odo fell ill and died. When their leader died, the siege force abandoned Langeais. After killing his most dangerous enemy, Fulk captured Tours, which had previously belonged to the Count of Blois. After Robert, king of the Franks, took control of Tours, Fulk turned to the castles of Langeais, Montsoreau, Montresor and Montbazon to protect the Loire Valley.
In 1016 hostilities resumed between the counts of Anjou and Blois. During the conflict, Fulk lost control of three castles: Passavant was destroyed, and Montbazon and Langeais were probably captured. By 1032 the Château de Langeais was back under Fulk’s control. However, it was again taken by the forces of Odo II, Count of Blois. Odo II died in battle in 1037 and was succeeded by his son Theobald; Upon receiving news of the death of his rival, Fulk set about reclaiming the Château de Langeais. The siege began in the winter of 1037, and in the spring of the following year, the garrison easily surrendered. Fulk set his sights on further territorial gains and successfully captured the Château de Chinon at a distance of 22 km.
Under the Plantagenet kings, the castle was fortified and expanded by Richard I of England (“Richard the Lionheart”). However, King Philip II of France recaptured the castle in 1206. In the end, however, during the Hundred Years’ War, the British partially destroyed it. The castle was rebuilt around 1465 during the reign of King Louis XI. On December 6, 1491, the wedding of Anne of Brittany and King Charles VIII took place in the great hall of the castle, which forever united Brittany and France.
In 1886, Jacques Siegfried bought Château Langeais and began a restoration program. He installed an outstanding collection of tapestries and furniture and bequeathed the château to the Institut de France, who still own it today. The castle is open to the public. It is listed as a historical monument by the French Ministry of Culture.
What else is interesting. The halls display one of the best collections of tapestries of the 14th and 15th centuries, more than 30 pieces, collected by J. Siegfried from 1888 to 1900. In one room there is an installation of wax figures of the wedding scene of Charles VIII and Anne of Brittany.

Langeais is located between Tours and Saumur, see the Loire Valley castles map

How to visit from Paris or Charles de Gaulle airport