Blain is a French canton located in the Loire-Atlantique department (Pays de la Loire region), more than 3 hours from Paris by a high-speed train with transfer or by a car via highway. See the location on Loire Valley castles and wine map.

Geography, It is irrigated by the Isac River, which is part of the Nantes-Brest Canal. Another feature is the presence of forests of regional importance – Le Gâvre (not to be confused with Havre, a port city in Normandy).
After a redistribution of regions in 2014, the canton now extends from the forest of Le Gâvre to the main channel of the Loire River, the municipalities of Savenay, La Chapelle-Launey, Malville, Bouet, Lavaux-sur-Loire, Cordemais and Saint-Étienne-de-Montluc (Savenay, La Chapelle-Launay, Malville, Bouée, Lavau-sur-Loire, Cordemais et Saint-Étienne-de-Montluc), including all parts of the marshes along the Loire. A large geological feature traversing the southern part of the canton is the Sillon de Bretagne, whose highest point for the canton is located to the right of the Erle mill, in the eastern part of Cordem, near the RN165 highway. On the borders of the communes of Bouvron and Malville, Bouvron and Savenay, Quilly and Campbon (Bouvron et de Malville, de Bouvron and de Savenay and de Quilly and de Campbon) are former marshes, which, among the last in the department, were clearly demarcated between the communities that divided (in 1880), and then between their communities, different owners (in 1930-1950).
History, From 1833 to 1848, the cantons of Blaine and Saint-Etienne-de-Montluc had the same General Counsel. The number of General Counsels was then limited to 30 per department.
By a decree of February 25, 2014, the number of cantons in the department was halved, which was announced in the departmental elections in March 2015. The canton of Blain was retained and expanded. It includes from 5 to 14 municipalities, including the communes of Blain, Bouet, Bouvron, Campbon, La Chapelle-Launay, Cordemé, Le Gâvre, Lavaux-sur-Loire, Malville, Prinkiau, Chilly, Saint-Étienne-de-Montluc, Savenay and Le Temple-de-Bretagne Temple-de-Bretagne). The commune of Notre-Dame-de-Landes joins the canton of Nord-sur-Erdre, while Fey-de-Bretagne joins the canton of La Chapelle-sur-Erdre. The cities of Savenay and Saint-Étienne-de-Montluc then dissolve. The Capital remains in Blain.

The main attractions in the area

.
Fortress and the castle of Blain.
The Groulais Castle or Blain is a medieval fortress located in the town of Blain itself. Built in the twelfth century by Alain Fergent, Duke of Brittany, then enlarged in the thirteenth century by the constable Olivier V de Clisson, and significantly altered in the sixteenth century in the Renaissance style, it was part of the defense of the Franco-Breton troops . It borders on the castles of Vitré, Fougères, Chateaubriant, Ancenis and Clisson.
This castle is classified as a historical monument.
The castle is located south outside the city, between the flat circular port of the Nantes-Brest canal (to the north-northeast), the N171 / D771 motorway connecting Laval with Saint-Nazaire (to the west) and the forest of Groulaie (Groulaie to the south). Access is via the N171 motorway or on foot via a footbridge crossing the canal at the southern end of the port. The moats were fed by Isac waters before the canal was built.
History of the castle. The first castle was built by order of the Duke of Brittany Alain IV Fergent around 1108. In 1225, the fortress passed to the Clisson family by marriage. After the uprising of Olivier I of Clisson against the duke in 1260, the castle was partially destroyed. The son of Olivier I, Olivier II de Clisson, received permission from the duke to rebuild the castle. The de Clisson family gradually enlarged it in the fourteenth century.
In 1407 the castle became the property of the de Rohan family, until 1802.
During the Wars of Religion, it was besieged by the Spanish tercios Juan del Aguila y Arrelano and set on fire on November 21, 1591, during the battles between the Duke of Merceur and the Chevalier de Gust. During the siege, the castle garrison hid their treasure – 30 kg of silver coins at the bottom of the cesspool! The castle was then restored by Catherine de Parthenay, who settled there with her children.
According to Frederic Ritter, the mathematician Francois Viet stopped here several times. Henri II de Rohan, becoming the first of the Protestant princes, in 1628 ordered Richelieu to demolish the castle, which has now lost its military power. The ramparts were partially demolished, but their impressive ruins still remain.

Revolution. During the revolution, however, the castle was seriously damaged: it was looted and set on fire. Rohan’s family archives burned down. Then he served as a barracks, then even a prison.
It passed into the hands of several owners, including the barons Lareinty, who owned it until 1918. In the same year, the wealthy Marie Bonaparte acquired it out of love for her lover, the deputy Aristide Briand, whose mother worked as a maid in the castle where he played as a child. On September 12, 1907 in Athens, Marie Bonaparte married Prince George, the second son of King George I of Greece. She restored the castle to live in it, but in the meantime lived in the castle of Pont-Pietin (Pont-Piétin), which belonged to the commander of the air Jules de Lareinty-Tholozan. 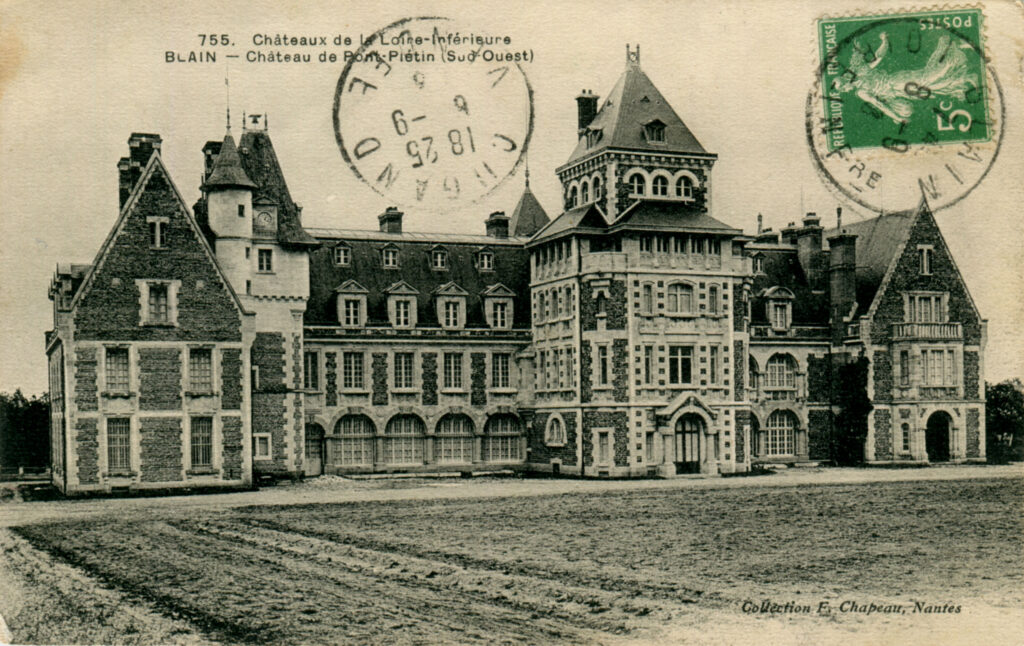 The Second World War. In September 1939, the castle was almost requisitioned by a British general who was in the region to locate a fuel depot, but in the end the castle was captured by refugees from Paris. His condition worsened considerably during the war, and the now elderly Marie Bonaparte decided in 1950 to part with several assets, including Blaine.
The owners restored the Logis du Roy dwelling and the Tour du Moulin tower. These parts of the castle were recognized as historical monuments on June 15, 1977, the commune bought these parts. The rest of the castle, which also remained private, was registered on the same day (1977). The surroundings of the castle (moats, park, gates) have been registered as monuments since March 26, 2009.
The castle was bought in 2011 by Yvon and Laurence Morin, who took care of the restoration of the roofs. The laser game occupied one floor of the royal house for some time.
In June 2017, 3500 m2 of the private part of the castle was put up for sale. They include the queen’s cellar, royal house, mill tower, old mill turned home, car park and gardens.
Architecture.
The castle once had up to twelve towers. Today there are more or less as many as nine.
There are four of them in the small Le Petit Chastel:
– Tour du Moulin (northwest), round, with a roof terrace and mechanisms;
– The Constable’s Tower (North East), round, with a conical roof, plus a projecting square tower-staircase, covered with slate, dating from 1386 and measuring 45 m by 15 m;
– Tower Donjon des Armes (southwest), destroyed by order of Richelieu in 1629;
– The clock tower was demolished in 1804, only the foundations remained of it.
There are six of them in the Great Enclosure:
— Northeast tower, XVI century, diameter 22 m;
– East tower, sixteenth century, 22 m in diameter, in the shape of a horseshoe;
– South-East Tower, 16th century, 22 m in diameter, above which rises the Prison Tower (14th century) (25 m by 8.5 m), covered with a conical slate roof;
– Tower Pont Levis, fourteenth century, 40 m by 15 m, covered with a conical slate roof;
— The horseshoe-shaped southwest tower protected the drawbridge.
Palais Le Logis du Roy (which currently hosts one-off events: Christmas markets, sales, Halloween, weddings, seminars, etc., 15th century, between the towers of Coneble and Moulin, in front of which is a French garden. Rebuilt by Marie Bonaparte ( princess of Greece) in the nineteenth century, it is in the Renaissance style, with tall skylights, gargoyles and chimneys made of brick and slate.
The Logis de la Reine palace, destroyed by Richelieu, was located between the Moulin tower and the Donjon des Arms tower. All that remains are the lower parts and cellars, called the “Queen’s Cellar” (now hosting events such as a Christmas market and occasional events).
The castle is spread over an area of ​​4.4 hectares, including the ditches and ditches that Isak fed in the past. The space in what remains of the fortified enclosure (Great Enclosure), turned into a lawn, undergoes a medieval reconstruction every year. The visitor car park occupies most of the former main courtyard, however it is privately owned and reserved for visitors to the private section where events are held from time to time.
The main entrance passed through a monumental gate in the northwest, at Les Paves, rue Olivier V de Clisson. The entrance to the current castle is located in the southwest, on a drawbridge (deemed unusable due to collapse).
The Great Enclosure is an inaccessible and public part.
Of the vanished chapel of the sixteenth century, only the crypt remains. Outbuildings at the monumental gates turned into huts.
The fortress houses the Fresco Center, a fresco workshop and the Old Seal Museum.

Official website www.chateaudelagroulais.fr
How to visit this area.
The Nearest airport.

You can visit the castle by including it in an individual tours to the Loire Valley by a car.