Angers Castle (French Château d’Angers) is located in the city of the same name, in the department of Maine-et-Loire (French Maine-et-Loire) in France, approximately 2-3 hours by high-speed train or by car from Paris.
History of Angers Castle, briefly
In the 3rd century AD, on the land of Angers, which was part of the Roman Empire, there was a fortified border settlement to protect against raids by barbarian tribes and Vikings.

In 851, the fortress fell under the control of the County of Anjou.
In 1040-1060, during the reign of Geoffroy II, a large stone castle was built instead of a wooden fortress. Angers Castle becomes the “exit capital” of the English kings. Henry II Plantagenet (1133–1189) and Richard I the Lionheart (1157–1199) stayed on the continent and did business from the castle of Angers.
In 1199, Richard I the Lionheart dies and a few years later the French king Philip II (French Philippe Auguste) captures Maine, Normandy and Breton.

In 1204, the French king Philip II (French Philippe II Auguste) also captures the County of Anjou.
By 1240, the construction of the castle with 17 round towers and powerful walls was completed.
Under Louis II of Anjou, a chapel and royal chambers were built in the courtyard of the castle.
The son of Louis II, René the Good (1409-1480) ennobled the castle with parks and gardens. From his family estate in Provence, he brought flowers and ornamental shrubs. An original and unique menagerie appeared in the castle, designed not only to serve hunting fun, but also became the prototype of modern zoos. Rene also began to arrange original holidays in the castle, for example, jousting tournaments in the manner of great ancestors.
Louis XI strengthened the military potential of the fortress. The walls of the castle are surrounded by fortress artillery.
In the early 1400s, King Charles VII took refuge in the castle of Angers, who then, with the help of Joan of Arc, managed to drive the British out of the country during the Hundred Years’ War.
In 1562, Catherine de Medici modernizes Anzhinsky Castle in accordance with the military realities of that time.
In 1574, Henry III, fearing the military uprisings of the Protestants, ordered the seventeen towers of the castle of Angers to be cut down to the level of the walls. The material from the towers went to the construction of the streets of the city, while continuing to maintain the castle in combat readiness and installed powerful artillery on the walls.
In 1652, during anti-government unrest in France, Henri Chabot, Duke of Roan, governor of Anjou and supporter of Louis II, Prince de Conde, raises an uprising in Angers. In February of the same year, troops led by Louis XIV and Cardinal Mazarin approach the city. Henri Chabot decides to save the city from being sacked and surrenders Angers and the castle without a fight.
In the XVIII century, a military academy was founded on the territory of the castle.

In 1939, Angers Castle became a refuge for the Polish government in exile after it was captured by Germany.
In 1940, Angers Castle was occupied by German troops.
In 1942, Angers became the regional center of the Gestapo.
Angers was released in 1944. During the retreat, the Nazis severely damaged the castle by blowing up ammunition depots. 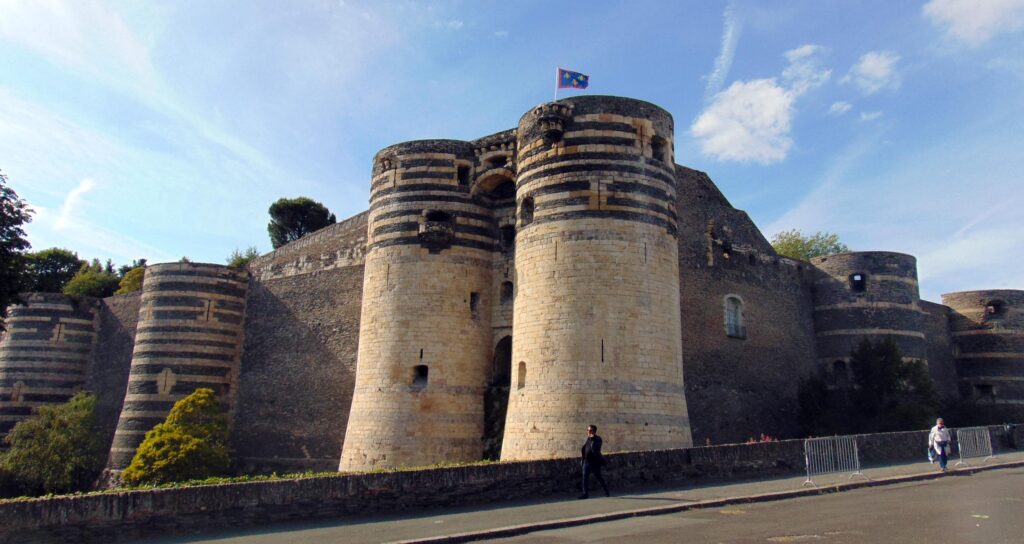 Currently, the castle is open to the public and is one of the most beautiful castles in the Loire Valley. The photo of the beginning of the 20th century shows the entrance to the castle, the bridge, the moat and high walls. Almost everything is now preserved in an authentic form, and through the bridge you can enter the castle and buy tickets.

Angers Castle, the practical tourist information
What you need to know to plan your excursion from Paris to the Loire Valley.

Ticket price. Adults 8.50 euros. For children under 18 free of charge. Group rate (from 20 people) – 6.5 Euro.
There is an audio guide around the castle – 4.5 Euro
You can also visit the castle in the evening for a separate fee.