During the flight of the Lockheed U-2 spy plane with pilot Harry Powers on May 1, 1960, the leading expert (senior officer) of the Aviation Department of the Operational Directorate of the General Staff of the USSR was Colonel Fedor Teteryadchenko. At a time when many commanders were destroyed by Stalin during the “Great Terror” or died during the Second World War, Colonel Teteryadchenko received a special military education and extensive practical experience. After the Second World War, he once again entered and graduated from the most prestigious Military Academy in the USSR. Thus, by 1960, the colonel was one of the most educated specialists in aviation, including intelligence, and had extensive practical combat experience. His knowledge included not only Soviet, but also foreign aircraft, including the new American reconnaissance ones. 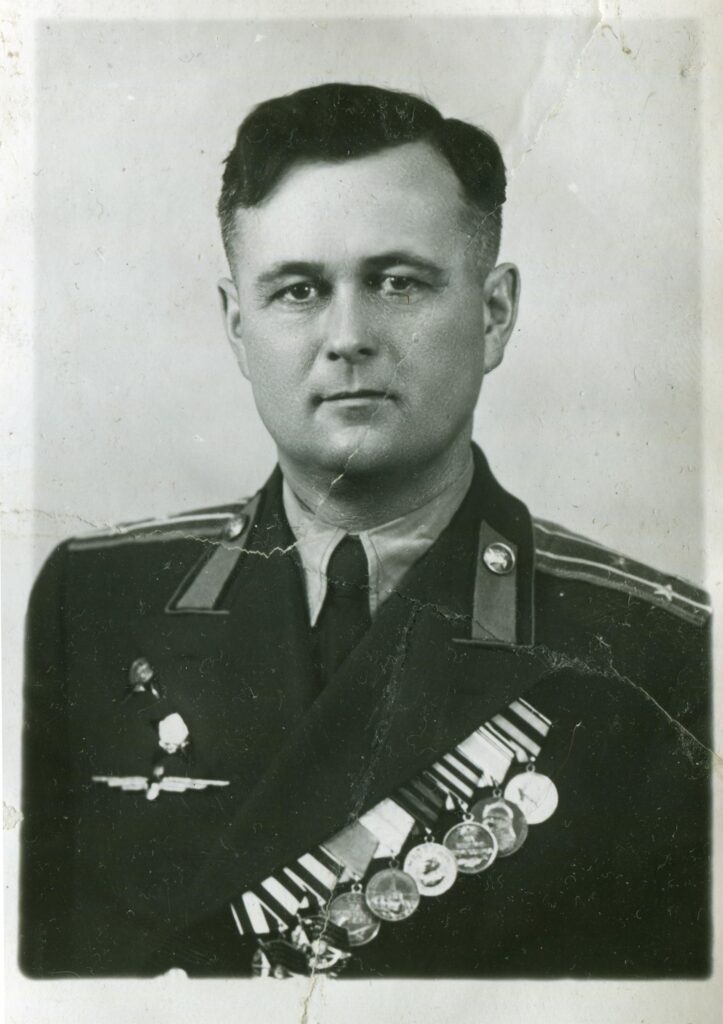 During the downing of an American Lockheed U-2 aircraft, chaos and poor coordination of air defense and aviation occurred, as a result of which Soviet interceptor aircraft were mistakenly destroyed. This led to large layoffs in 1961-1962 of many aviation and air defense officials. According to the received military education and impeccable service, Colonel Teteryadchenko was supposed to become a general, but did not. The exact reason is unknown, but in 1961 Teteryadchenko was dismissed from the Armed Forces with the wording “for seniority.” According to Soviet traditions, the entire history of service in the General Staff and after was classified and it was approximately possible to restore only some documents with numbers of military units.
According to these documents, after his dismissal from the army, Teteryadchenko, as a reserve colonel, continued his military service as an engineer (specialist) at the secret Scientific Research Institute of the GRU General Staff. The work was related to the study of foreign aircraft of NATO countries.
Upon completion of work at the research institute, Teteryadchenko took an active part in party work, was elected a delegate to party conferences. He also took an active part in the work of the Council of Veterans of the Second World War, including the 14th, 16th, 1st and 3rd Air Armies.
He died in Moscow in the 90s (the exact date has not yet been determined).

Fedor Alekseevich Teteryadchenko, was born on April 22, 1908, in the village of old Nelidovka, Belgorod district, Tolokonnaya volost, Kursk province. Wife. Teteryadchenko’s wife.
Ukrainian natiovality, **.
(A large detailed section on relatives, including an indication of who was in the territory occupied by German Germany in Ukraine).
In 1926 he graduated from the Dnepropetrovsk Pedagogical College. From 1926 to 1929 he worked as the director of a labor school in the Bliznetsovsky district of the Dnepropetrovsk region (now the Kharkov region), at the same time as the secretary and chairman of the Rabotpros union (educators). From 1929 to 1930 he was the head of the organizational department of the RK LKSMU (District Committee of the Leninist Communist Youth Union – students) of the Bliznetsovsky district.
In 1924 he became a member of the Komsomol (All-Union Leninist Communist Youth Union), and in 1928 as a candidate and in 1931 a member of the All-Russian Communist Party of Bolsheviks. Member of the All-Russian Communist Party of Bolsheviks CPSU (b), party card number 1976208.. As candidate accepted by the Bliznetsovskaya party organization, and as a member of the party organization 6KAP (corps artillery regiment).
From 1926 to 1930 he took part in party and public work, political and economic events of the country, such as collectivization *, grain procurements and others.
In 1930, the Dnepropetrovsk Military registration and enlistment office was called to serve in the Red Army (Workers’ and Peasants’ Red Army). He began his service in the 6th Corps Artillery Regiment in a “one-year team” (military training). In 1931, he finished his service in the “one-year team” and was left in the same regiment to serve. From 1931 to 1938 he served as a platoon commander, assistant battery commander, assistant chief of staff of the regiment. From 1938 to 1939 he completed his studies at the Higher Staff Courses at the Military Academy named after M. Frunze. From 1939 to 1941 he studied and in 1941 completed his normal studies at the M. Frunze Military Academy. In March 1941, among 50 people, he was selected for service in air units and sent to study at KUNS (Advanced Courses for Commanding Staff) at the Command and Navigation Air Force Academy in Monino.
After completing his studies at KUNS in May 1941, he was sent for further service in the 56th (IAD) fighter aviation division to the city of Saltsy, Leningrad Region. From June to December 1941 he worked as head of the operations department of the 56th IAD and the 2nd RAG (reserve aviation group). During 1942, he was the chief of staff of the 283rd IAP (fighter aviation regiment). From February to April 1943 – head of the operations department of the 179th IAD (fighter aviation division). From April to June 1943 Assistant Chief of the Operational Intelligence Department of the 6th IAK (Fighter Aviation Corps). From July 1943 to 1945 he was chief of staff of the 130th IAD (fighter aviation division).
From 1945 to July 1946 Chief of Staff of the 324th IAD. From July 1946 to November 1949 – officer and senior officer operator of the Aviation Department of the Main Operations Directorate of the General Staff of the Armed Forces. From December 1949 to the present time – a student of the aviation faculty of the Higher Military Academy named after K. Voroshilov **. 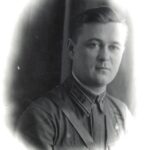 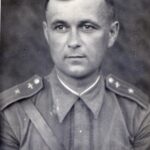 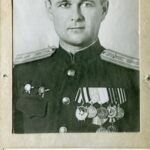 He participated in the Great Patriotic War from the beginning to its end. From 1941 until the breaking of the blockade of Leningrad on the Volkhov Front as part of 14 VA (air army), 1943 on the central front as part of 16 VA, in 1944 – in East Prussia – 3 Belorussian Front as part of 1 VA *** and 1945 – as part of 3VA to eliminate the Koenigsberg group. He ended the war as chief of staff of the 130 AID in the city of Neuhausin (Koenigsberg-Kaliningrad region). He had no wounds, concussions or injuries. Did not participate in the civil war. He was not captured by the White Army, he was not invaders in the civil war and during the Great Patriotic War, he was not surrounded and in the occupied territory during World War II.
He did not serve in the old (imperial, tsarist) army, in the White Army and other anti-Soviet nationalist armies.
Was not convicted. The prosecutor’s office or the NKVD of the Soviet government was not brought to justice. Parents, my wife’s parents, as well as my brothers and sisters’ wives, were not deprived of their voting rights, they were not brought to justice. Of the relatives abroad, none lived and does not live. Was not abroad. He had no party penalties.
The rank of colonel was awarded by order of the USSR Air Force N 01508 of August 5, 1948.
Student of the 2nd year of the Aviation Faculty of the Higher Military Academy named after K. Voroshilov, Colonel Teteryadchenko. (?1951)
To be continued.

* * The 1st Air Army also included the famous French regiment “Normandy” (“Normandie-Niemen”). All regiments had the same WW2 battlefields in Belarus and East Prussia. All intelligence information about the enemy received by the chief of staff of the 130th IAD, Lieutenant Colonel Teteryadchenko, went to the 330th IAD, including the 18th Guards Regiment “Normandy-Neman”. 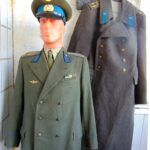 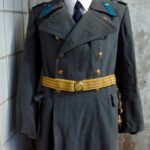 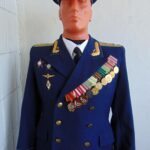 In the 1950s and 60s, there were no computers to automatically recognize the silhouettes and types of the enemy aircraft, everything was done by the hand and head. To help Soviet experts, the GRU created the special pocket guides with the main types of the enemy aircraft from NATO countries – the USA, England, France, including the serial and experimental ones. The guide shows a photo, as well as technical characteristics – the armament, maximum flight altitude, maximum range etc. Note that the Lockheed U-2 is not included yet, as its specifications were not fully known. Below is such a pocket guide of Colonel Teteryadchenko for 1962. 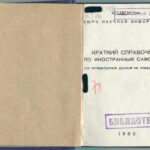 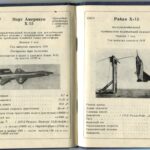