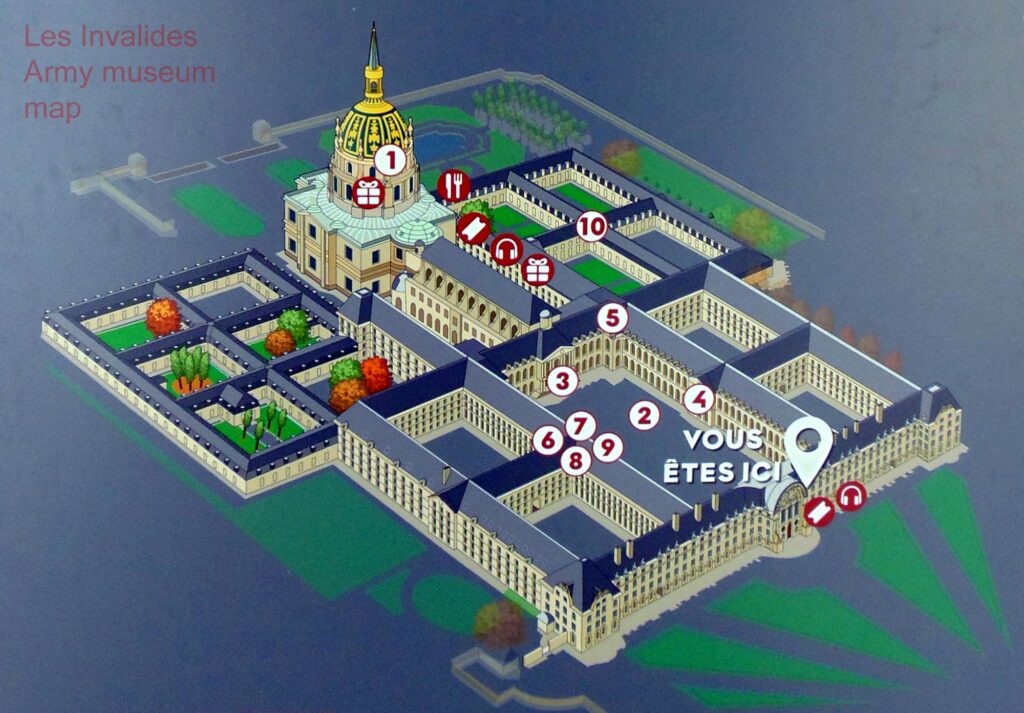 Section of ancient weapons (Armes et Armures Anciennes)
The Paris Army Museum owns the world’s third (after the Vienna and Madrid museums) collection of weapons and armor. The collection covers a wide historical period: from the Paleolithic to the middle of the 17th century. The museum exhibits about 2,500 pieces of armor and weapons. For the most part, these are French weapons, but other European countries are also represented, as well as countries of the Middle and Far East (Ottoman Empire, Persia, India, China and Japan).
Among the exhibits, it is worth noting the ceremonial armor of the French kings (Henry II, Henry IV, Louis XIII and Louis XIV), a collection of French portable small arms of the 17th century.

Section of the New Age (1648-1792)
The section covers the period from Louis XIV to practically the French Revolution. The period is characterized by dramatic changes in the structure of the French army.
Already under Louis XIV, the army was being reformed, building a clear hierarchy of military ranks. Since 1680, a mandatory uniform has been introduced for all, the French army has been participating in the Thirty Years’ War.
During the reign of Louis XV in France, the first standard weapon appears – a gun of 1717. With it, French soldiers will go through the War of the Austrian Succession.
Under Louis XVI, the army becomes more professional, the clarity of the military regulations and technical progress are the two main ingredients that brought up the future soldiers of the French revolution. During the reign of Louis XVI, France participates in the American War of Independence.
– the hall of antique weapons of the XVII-XVII centuries – pikes, halberds, flintlock guns.

Section of the New Age (1792-1871)
The section describes the history of the French army from the French Revolution to the Paris Commune.
Napoleon’s hats can be noted as interesting exhibits – the great commander changed his famous cocked hat about once a month, which amounted to about 170 hats during his reign. To date, about 20 Napoleon hats have survived, 6 of them are stored in the Paris Army Museum.
The section also presents the general uniform of Napoleon, which the commander wore during his Italian campaign, his own saber from the Battle of the Pyramids during the Egyptian campaign. As the First Consul of the empire, Napoleon established an honorary weapon, which was awarded to soldiers who showed heroism during battle. Many of these items are also kept in the museum. Among other exhibits from the Napoleonic era, the museum houses the necklace of the Emperor’s Legion of Honor, his sword from the Battle of Austerlitz, and one of Bonaparte’s famous gray frock coats.
The restoration of the monarchy, more precisely, the reign of Charles X and Louis Philippe, is marked by the colonial campaigns of the French army. The museum displays the uniform of the French African Corps, created with pronounced oriental motifs.
During the Second Empire, Napoleon III carried out a technical re-equipment of the army, which led to talk about it as a worthy descendant of the Great Army of Bonaparte. The Crimean War, the war in Italy and Mexico, the pacification of the Algerian colonies, the Syrian and Far Eastern campaigns belong to this time.
The section ends with a story about the war of 1870-1871 and the beginning of the Commune.

Two World Wars Section.
This section tells the history of the army from 1871 to 1945: the III Republic and the Vichy regime, the First and Second World Wars. Not only the French army is shown in this section: in addition to the most beautiful uniforms of tsarist Russia, the museum displays the uniforms of almost all the armies that fought in world wars.
On June 18, 2000, on the day of the 60th anniversary of the call of Charles de Gaulle to the French people, new halls dedicated to the Second World War were opened.
And since July 2006, the section has been completely rebuilt, the collection dedicated to the III Republic and the end of the First World War has significantly expanded.

– the outdoor exposure
Includes vintage cannons and even a World War I tank.
The museum has special sections dedicated to:
– artillery
– flags, banners, both French and captured
– scale models of soldiers, for lovers of military miniatures
– battle painting
– Russian WW1 collection, regalia of the Russian Imperial Army
The museum is open every day except the first Monday of every month. Weekends January 1st, May 1st, November 1st and December 25th.

The museum is recommended for the independent visits. How to visit the Army Museum, ticket prices, tours, exhibitions?